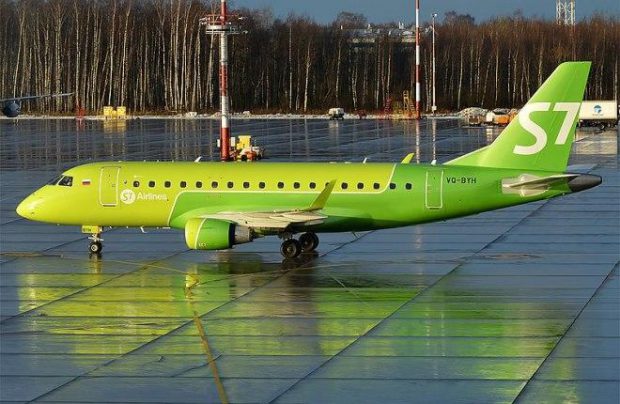 Delay to the SSJ75 development poses a threat to the loyalty of S7 Airlines, the project’s largest commercial customer, which could instead turn to similar size western-built aircraft types. The carrier already operates 14 Embraer 175s (SSJ)

Russia’s United Aircraft Corporation (UAC, part of Rostec) has postponed the creation of the Superjet 75 (SSJ75), the shortened 75-seat version of the baseline 100-seater regional passenger jet. Instead, UAC is giving its fullest attention to the maximum replacement of the current aircraft’s foreign-made components. Delay to the SSJ75 development poses a threat to the loyalty of S7 Airlines, the project’s largest commercial customer, which could instead turn to similar size western-built aircraft types.

It is the lack of sufficient financial resources and management change that has forced the Superjet regional jet developer Sukhoi Civil Aircraft Co (SCAC, which is part of UAC) to indefinitely postpone the creation of the shortened 75-seat version of the SSJ100, several aviation industry sources have told Kommersant business daily. “The Superjet 75 remains on the agenda, but it is not top priority. The accelerated substitution of foreign components is considered to be a higher priority at this stage, rather than shortening the fuselage,” one of the high-ranking officials was quoted as saying.

Government approval for a shorter version of the SSJ100 was authorised by Russian president Vladimir Putin in March 2018. At that time Denis Manturov, the minister of industry and trade, asked for the head of state’s approval to create a smaller member of the SSJ family which would rely less on imported parts, a factor considered as the main advantage of the new model, and which would attract orders from both Russian and some foreign customers, such as Iran, seeking to avoid US sanctions. With more than 10 per cent of US-built components making up the basic version of the SSJ100, sales have to be coordinated with the US authorities.

Rubtsov had claimed that the SSJ75 shortened version would benefit from an efficient range of between 1,500 and 2,000 kms, its weight reduced by 10-15 per cent and its specific fuel consumption cut by five per cent. To secure orders from government customers, Russo-French SaM-146 engines (manufactured by the PowerJet joint venture) were to be replaced with Russian PD-10 turbofans (yet to be designed modifications of the bigger PD-14).

With Russian security services insisting that government customers should not use aircraft with components supplied by NATO-member countries, it was expected that the presidential flight wing, the special-purpose Rossiya flight detachment, and the Russian Ministry of Defence would be likely customers for the Russianised SSJ75, taking 10 aircraft (to replace the outdated Tu-134s and Yak-40s) and 35 aircraft accordingly.

A year ago, Denis Manturov believed that serial production of the 75-seater SSJ could be started in early 2025, four years after the approval of its design. Now such time frames seem “extremely optimistic.” There is no big difference between 98 and 75 seats aircraft for government customers. “It is easier to preserve the original characteristics of the SSJ100 and the provision of the maximum substitution of import parts is in the interest of all our customers,” says a high-ranking source in the government. ”The SSJ75 project can be reconsidered later if there is demand from abroad.”

In April, the ministry of industry and trade placed a 3.5 billion roubles research and development order with an ‘SSJ-New’ code, which involves the creation of a modified airliner “with the maximum substitution of foreign components and systems”. It is likely that the technical requirements for a fully localised SSJ100 may be approved in the first half of 2020.

The creation of the SSJ75 was directly linked to the April 2018 launch order of S7 Airlines, Russia’s largest private airline, which signed a letter of intent with SCAC for 50 aircraft with an option for another 25 units. “Our decision on the regional fleet [development] will be based on official information from UAC,” S7 said recently.

According to local analysts, with the absence of the Superjet 75 version, S7 may now instead opt for Embraer and Bombardier aircraft with similar capacity and range capabilities for the development of its fast-growing regional network. The carrier already operates 14 Embraer 175 regional jets.