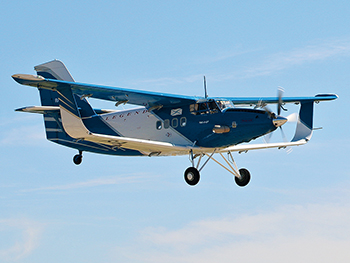 The MAKS 2015 flying display program includes a prototype of the TVS-2DT composite biplane by Siberian Aeronautical Research Institute (SibNIA). This technology demonstrator is based on the TVS-2MS, a re-engined Antonov An-2. The first TVS-2DT variant, a monoplane, performed its maiden flight from SibNIA’s Yeltsovka airfield in Novosibirsk in December, 2014. Six months later, on June 10, 2015, the biplane modification joined the factory tests there.

SibNIA’s composite biplane effort is part of the GA subprogram of the government program to develop the aircraft industry in 2013-2025. The subprogram calls for the development and production launch of a light multirole fixed-wing aircraft seating between nine and 19 passengers.

Earlier, SibNIA representatives said the TVS-2DT was primarily intended as the demonstrator of the institute’s capability to design, manufacture, and integrate an all-composite high-lift, high-aspect-ratio wing, a new avionics suite and powerplant in order to achieve aircraft performance that would meet the requirements for airplanes in this class.

SibNIA Director Vladimir Barsuk told Show Observer that this coming November, following the analysis of flight-test data, the institute will finalize the design of the biplane’s wing and empennage. A prototype all-composite fuselage should be manufactured by December.

“Thus, by the end of 2015 we will have finalized the pre-production design based on the results of the demonstrator’s flying tests,” Barsuk said. “After that we will select a design bureau for pre-production preparations; in parallel, we will be offering familiarization flights to existing TVS-2MS operators in order to gauge the potential demand for this new aircraft.” According to Barsuk, if design bureaus and production facilities refuse to participate in the program, SibNIA will set up its own production facility modeled on Rusaviaprom, which currently manufactures TVS-2MS biplanes.