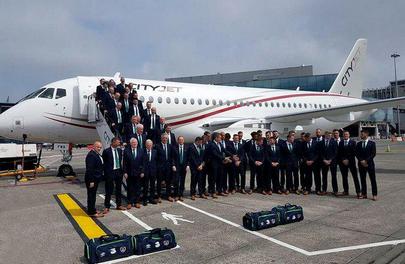 Irish carrier CityJet launched commercial operation of its first Sukhoi SuperJet 100 with a charter flight from Dublin to Paris (Le Bourget) with the Irish national football team onboard for participation in the European championship, according to the aircraft’s manufacturer Sukhoi Civil Aircraft. CityJet is official partner of Football Association of Ireland (FAI).

Transporting sports teams is an important business direction for SCAC, the OEM’s spokesperson said. This week the company announced it was working on a cabin configuration especially designed for transporting professional teams, dubbed SportJet by Sukhoi concept. The modification is expected to be ready by 2018 and will be offered on the domestic as well as international markets.

CityJet’s aircraft, which made its first commercial flight, is s.n. 95102. It is the first out of three SSJ 100s which will be delivered to the Irish carrier before the end of the year. The second aircraft is scheduled to arrive in June.

The aircraft are provided on operational leasing terms by RJ Leasing, and the transaction is financed by Russian VEB Bank. CityJet has the total of 15 SSJ 100s on order to be delivered until the end of 2017, and an option for 16 more. These may be transferred to firm orders in the third quarter of this year.