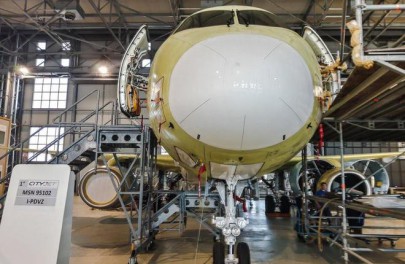 Irish carrier CityJet is expected to take delivery of its first Sukhoi Superjet 100 (SSJ-100) this May.

Originally scheduled for the first quarter of 2016, the delivery has been delayed. A spokesperson for SuperJet International, a joint venture between SCAC and Italian Alenia Aermacchi responsible for selling SSJ-100 outside Russia, told Russian Aviation Insider that the aircraft has already been ferried to SJI’s base in Venice where it is being outfitted and customized.

The aircraft, which made its first flight in December of last year, will be the first Sukhoi Superjet 100 out of the batch of 15 scheduled to enter service with the Irish airline. The aircraft will be fitted with 98 seats. Its interior design is done by Pininfarina, an Italian firm, which also designed SSJ-100 interiors for Mexican air carrier Interjet. Apart from the firm order for 15  Sukhoi Superjet 100s, CityJet placed an option for 16 more aircraft, which may become firm orders by the third quarter of this year. Delivery of the first batch is expected to be completed before the end of 2017.

CityJet will be the first and so far the only operator of Russian-made regional aircraft in Europe; another potential operator, Belgium-based VLM Airlines, cancelled their order for SSJ-100LR in February of this year. CityJet intends to wet-lease its aircraft, so several European carriers will have an opportunity to test out the Sukhoi Superjet 100.