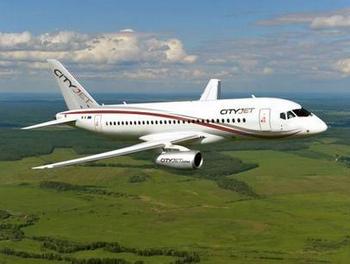 Irish regional carrier announced today, that it has signed a preliminary agreement with Sukhoi Civil Aircraft (SCAC) and SuperJet International (SJI), which may transfer into a firm contract for 15 Sukhoi Superjet 100 (SSJ100) aircraft with an option of 10 more. The agreement, valued at over US $1 bln, also covers after-sale support, including a customized maintenance program.

The deliveries are to start in the first quarter of 2016. CityJet will get four aircraft within next year, and 11 more before the end of 2017. The aircraft in the 98-seat configuration will replace the fleet of Avro RJ85 on the flights within Europe, including London City airport. The airport with its stringent approach procedures sets special requirements to aircraft capabilities and an additional approval. The OEM is expecting to receive the certificate by the end of 2016, SCAC rep said.

The Irish carrier chose SSJ 100 over Embraer 190. This marks a significant achievement for SupeJet International, a joint venture between SCAC and Italian Alenia Aermacchi, responsible for European marketing, sales and support of the Russian aircraft. SJI will provide its first customer with a 12-year customized SuperCare maintenance program starting from entry into service of the SSJ100s. CityJet’s crews will start their training on SSJ100 full-flight simulator at SJI’s facilities in Venice closer to the end of the year.

The Irish airline may become the first European customer for SSJ100, which received its EASA type certificate in 2012. At the end of 2014 Belgian VLM Airlines placed an order for two SSJ 100s, but later on shifted first delivery to third quarter of 2016 for additional certification requirements. Currently the only SSJ operator outside Russia and CIS, is the Mexican Interjet.