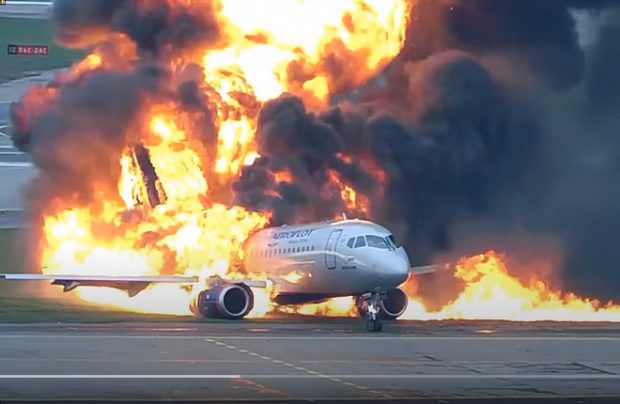 On April 15, just short of a full 12 months after the crash landing of Aeroflot’s Superjet 100 flight 1492 at Moscow’s Sheremetyevo airport, Russia’s prosecutor office has announced the completion of its investigation into the cause of the accident and that it has found captain Denis Yevdokimov guilty of inadequate actions that led to the deaths of 41 people.

Of the case, which will shortly be handed over to the law court, Svetlana Petrenko, the spokeswoman for the investigating committee, revealed that the pilot is facing the prospect of seven years in prison.

In the meantime, the Interstate Aviation Committee (IAC), the authorised and competent aviation safety investigation body that is conducting the formal investigation into the crash, has not yet fully completed its proceedings and is yet to publicise its findings that will confirm the attribution of pilot error as the sole cause of the accident.

On May 5, 2020, the first anniversary of the tragedy, the 43-year old captain Yevdokimov gave his first post-crash public interview to Russia’s Lenta outlet, in which he denied the charges and expressed his views of the accident.

The prosecutor’s office had investigated three possible contributory factors: pilot error, air traffic control aspects and rescue service errors, and the airworthy condition of the aircraft. The investigators came to the conclusion that it was the captain’s inadequate actions in controlling the aircraft, namely the decision to land overweight, the failure to go around after a wind-shear alert, and a hard-bounce landing, were actions which are “in violation of the existing rules” and which led to the disintegration and subsequent “ignition of the aircraft.”

In his interview though, Denis Yevdokimov painted a different picture, insisting that, after being hit by the lightning strike, which disabled the aircraft’s fly-by-wire system automatically switching it to the so-called ‘direct mode’, the aircraft then became uncontrollable. He explained his decision to return immediately to the airport with a landing above the maximum landing weight with loads exceeding 5g, and his unwillingness to execute a missed approach and the multiple bloats, were all a consequence of his “fear of a total loss of control.”

He also believes that further research should be conducted into the airworthiness of the Superjet 100 to prevent such incidents recurring in the future. He asserted that both IAC and the prosecutor’s office have been negligent towards the effect of the atmospheric electricity on the aircraft’s control system, even though IAC has confirmed the presence of the lightning strike. He also said that, although controlling the aircraft in direct mode is part of the simulator-training syllabus, in reality the experience “differed significantly” from simulated situations.

“We had indications of multiple failures on our screens and we were unable to assess the severity of the damage done to the aircraft in the air. We could not continue the flight because flying in direct mode is allowed only at lower altitudes, and we did not have enough fuel for that,” Yevdokimov commented on his decision to return to Sheremetyevo immediately after the lightning strike.

“I made the decision to land with weight exceeding the maximum landing weight [by 1,600 kilos] out of the fear of losing control of the aircraft altogether. If that electrical discharge had exceeded the certification values, we could have expected a cascade of failures and the subsequent complete [total] loss of control,” he explained. He also insisted that his deviations from the glide path on final approach were due to difficulties in maintaining required flight parameters.

“When the formal charge was brought against me, the prosecutor’s office had just retrieved data from the emergency flight data recorder (FDR), foregoing any detailed analysis of the aircraft’s actual response to my inputs,” he argued. In the meantime, what he observed in flight was that the aircraft’s response was the opposite of normal – the nose dived when he pulled the stick, for example, and there was at least a one-second delay in responses to control inputs.

He also observed that a wind shear alert is ‘advisory information’ and no wind shear was actually observed at touchdown.

Meanwhile, the pilot’s lawyer has drawn attention to the fact that lightning strikes are not mentioned in the manufacturer’s documentation as a possible cause of disengagement of automation and the switching of the fly-by-wire system into the direct mode. “None [at the prosecutor’s office] looked into the effect of electricity on the aircraft, and the aircraft itself was not even recognised as material evidence,” Yevdokimov said.

Regarding his failure to initiate a go-round after the aircraft twice bounced off the runway, bloating as high as six metres, he said it was also due to the aircraft’s contrary response to his inputs. “Increasing thrust to take-off levels results in a significant increase of pitch-up moment” which, when coupled with the reverse responses, would have been deadly.

Finally, regarding the issue of the landing gear puncturing the fuel tank, which was the direct cause of the subsequent fire, he referred to the aircraft’s airworthiness standards which require the SSJ100’s landing gear struts to collapse during high-g landings, a mechanism which would have prevented “further bouncing and ignition.” He also recalled similar incidents with the type, when the gear strut damaged the fuel tank and, by good fortune, there had been no fire. “This problem is repeating itself, but it is being ignored,” he insisted.