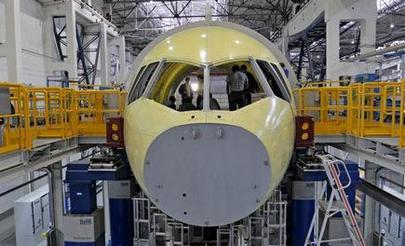 The assembly of the first MC-21 prototype (Photo by Ikrut)

Egyptian investment holding company KATO Investment has ordered six Irkut MC-21 airliners. Under the agreement signed at Dubai Air Show 2015, the aircraft will be added to the fleet of KATO’s subsidiary Cairo Aviation. The agreement also covers an option for four more of the type. The delivery terms are not being disclosed.

In the course of negotiations, KATO Investment Chairman Ibrahim Kamel offered to build an MC-21 MRO center. The facility is expected to be located near Al Alamain International Airport , which is located 184 kilometers away from Cairo.

As of the end of 2014, Cairo Aviation was operating two Tupolev Tu-204-120C freighters. One of these has since been leased to the newly created Croatian airline Sea Air.

In the first half of the 1990s, KATO Chairman Ibrahim Kamel took part in financing the program to re-engine Tu-204s with Rolls-Royce RB-211-535Е4 powerplants, developed specifically for the Boeing 757. In exchange, the businessman received worldwide sales rights for the type (excluding to Russia). Back then, China was the only country that expressed an interest in the re-engined aircraft. However, the program was eventually closed due to delays with European certification.

By the summer of 2014, MC-21 manufacturer Irkut Corporation had received 273 orders for the new type including 175 firm orders. The overall number of potential customers for these aircraft was estimated to be 370 worldwide at the time.

The roll-out of the first MC-21 prototype is scheduled to take place by year-end. The manufacturer expects commercial operations to begin by the end of 2018.