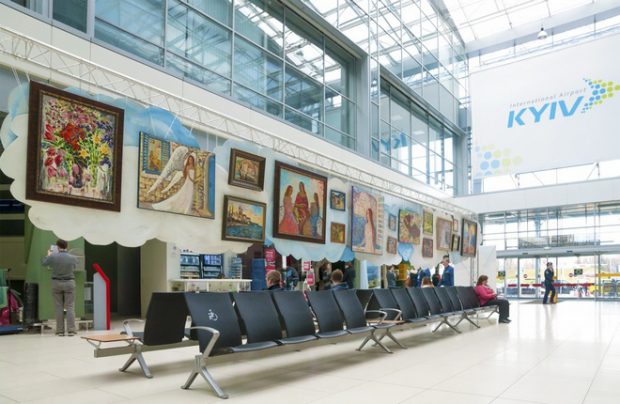 2016 was a make-or-break year for Zhulyany airport (IATA code IEV), in Ukraine’s capital city of Kyiv. Impressively, it was one in which passenger traffic achieved significant growth of 19%. Much of that success was down to the general recovery of the air transport market and, oddly enough, by the policy of the gateway’s main competitor, Kyiv’s other airport Borispol.

In 2011, Kyiv’s oldest airport of Zhulyany (established in 1924) enjoyed a substantial rejuvenation, having its runway resurfaced and extended to 2,310 meters. The upgrades allowed it to attract long-haul aircraft operations, whereas the old 1,800m runway was compatible only for regional jet and turboprop services.

The reconstruction was conducted under the national transport infrastructure improvements program and was timed to coincide with the UEFA Euro 2012 football finals. During the championship the airport serviced the flights of all the participating national teams scheduled for matches in Kyiv as well as many private aircraft and multiple charter flights carrying football fans.

The result is that Zhulyany is now able to present itself as a successful example of a public and private partnership airport (with Kharkov the only other positive example). Currently the gateway is operated by privately-owned Master-Avia, which has built two passenger terminals (separate facilities for international and domestic flights) and a VIP-terminal for business aviation.

In 2011, Wizz Air Ukraine, the Ukrainian arm of European low-cost company Wizz Air, decided to relocate its Kyiv base from Borispol, thereby providing Zhulyany with the motivation to embark on the modernization project. Later on, five more air carriers followed the Wizz Air lead so that in thriving 2013 (see chart) the airport listed Wizz Air Ukraine, UTair-Ukraine and Russian Transaero and UTair among its key operators. Perversely, it was downturns at precisely these ambitious airlines which appeared to be the primary reasons for the airport rapidly losing much of its passenger traffic during the crisis of 2014-2015. In this difficult period Wizz Air shut down its Ukrainian branch, having ceded some of its flights to its Hungarian parent airline, whilst UTair-Ukraine, a subsidiary of Russia’s UTair, scrapped its scheduled flights program, whilst all Russian carriers ceased flights to all Ukrainian airports. One of the keys to success of Kyiv’s private airport of Zhulyany is its flexibility in negotiations and its entrepreneurial tariff policy – as opposed to the rigid, unyielding commercial approach of its rival, state-owned Borispol. Zhulyany offers attractive discounts for airport fees providing low-cost carriers with exactly what they need.

At the same time, Kyiv’s oldest airport has fewer formal regulatory and bureaucratic constraints, unlike at Borispol where, typically, an overnight stand for an aircraft requires special approval from the Ukrainian State Aviation Administration (a requirement allegedly introduced by a silent rule of the national flag carrier). Zhulyany has no such restrictions and airlines willing to perform flights which require a night stop migrate to Zhulyany or launch additional flights from there. A good example of this is LOT Polish Airlines, which has recently started operating night flights to Zhulyany. Similarly, Italian carrier Alitalia has also chosen it, rather than Borispol, for its return to the Ukrainian capital.

From the passengers’ point of view, Zhulyany’s advantages include a space-efficient terminal, plus a convenient location on the Dnieper river’s right bank, just a few kilometers outside the centre of Kyiv.

Despite these advantages, the flexible gateway lags behind Borispol with regard to the size of commercial aircraft types it can receive, with the Airbus А320 the largest that Zhulyany can handle. Further runway extensions are impossible, because the airport is tightly surrounded by residential areas and other urban infrastructure. Moreover, compared to the all-weather Borispol, the winter-period landing conditions of Zulyany’s runway mean an increased number of bad-weather flight cancellations, diversions and delays.

This means the combination of technical restrictions and business advantages are creating a specific market niche for the airport. Most certainly, Zhulyany will never evolve into a large air carrier hub, but its convenient location suggests that it will continue to be popular among business passengers on direct regular flights, as well as business jet operations. On top of that, Borispol’s foot-dragging and UIA’s robust lobbying are obviously pushing LLCs and other air carriers out to Zhulyany.