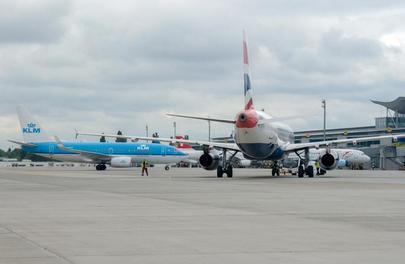 The largest Ukrainian air gateway, Kyiv Boryspil International Airport, has been increasing its passenger flow for several months in a row, thanks to implementation of the hub model of development.

In the first four months of 2016, Boryspil served 2.105 million passengers, thus showing a 12.6% year-on-year increase. In April, according to Russian Aviation Insider’s estimates, the passenger flow at the airport reached 593 thousand people, showing a 14.0% growth. Therefore, since the beginning of February 2016, the airport’s traffic has been exhibiting double-digit growth.

Boryspil Airport’s management explains its success as being a result of the successful implementation of the hub model. Supporting this point, the airport’s acting general director Yevgeniy Dykhne stressed that traffic at Boryspil continues to grow at a fast rate despite the decrease in the paying capacity of people.

From January through April 2016,  the transfer traffic share at Boryspil Airport reached 27% (562 thousand passengers), which means it rose 2.3 times as compared to the first four months of 2015. In April, this figure amounted to 30%.