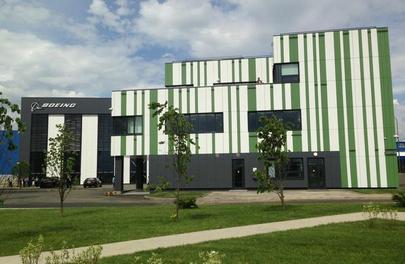 On June 3, Boeing officially opened an aviation training and research center in Skolkovo, a technopark-type project developed with the support of the Russian government in Moscow region. The Boeing center is a high-tech platform, which will provide theoretical and practical training for pilots, technicians and engineers. It will also develop research projects jointly with Russian universities and scientific institutions in the areas of aviation security, metallurgy, design of aircraft system components, and more, Boeing representatives explained.

The complex consists of two buildings, one of which is administrative, and the second one houses two full-flights simulators (FFS): Boeing 737NG and Boeing 777. Training for the 777 has not been provided in Russia before.

These simulators will be certified with the Russian aviation authorities within the next month, after which they will be operational, Mark Albert, head of Boeing’s Campus Operations & Flight Services, told Russian Aviation Insider. He said that six Russian carriers have already expressed interest in training their staff at Skolkovo, and promised to reveal more details later.

The simulators that have been installed at Skolkovo up to this point, were produced by Western companies. However, a Russian-made Boeing 737NG FFS will appear before the end of the year. The simulator was designed and produced by Kronshtadt Group (previously known as Transas Aviation). Kronshtadt’s corporate communications director, Stanislav Vartanyan, told Russian Aviation Insider that the simulator is at the final stage of check-outs. “We expect it to be installed before the end of the year. Later on, an additional simulator may be required, depending on the center’s load,” Vartanyan said, clarifying that it may be a different aircraft type, depending on client requests and market requirements.

Kronshtadt’s main area of expertise is helicopter simulators. “Fixed-wing aircraft simulators is the market niche we are actively exploring. This joint project with Boeing is a giant step forward for us into the segment of world-class producers of this equipment. The American OEM provided us with the initial data package, which is basically a mathematical model of how the aircraft behaves in flight. It also set the requirements for the simulator’s functionality. Other than that, the designers and engineers are Russians, Kronshtadt personnel,” Vartanyan emphasized.

The simulator will be initially certified by the Russian authorities, but the developer was challenged with the task of securing EASA certification to make the center competitive on the international market. The certification is expected to be completed by the end of the year.

According to the head of the Federal Air Transport Service Alexander Neradko, there is a sufficient number of flight simulators in Russia. There are simulators for both Russian aircraft, such as the Tupolev tu-204 and SSJ 100, and Western-built aircraft Вoeing 737NG/CL, А319/320/321, L-410, Cessna and Diamond initial training aircraft. “This year we are also purchasing simulators for Bell helicopters for Omsk Flight and Technical College,” Neradko added.

Boeing center’s key function will be enhancing flight safety, the head of the FATA said. “The training center is combined with a research facility here, which means that scientists in the area of aerodynamics and structural engineering will research how aircraft behave in the air, and correct their design and production solutions, thus enhancing flight safety. We’ve never had such a combination before. Science has always been separated from the training. In this facility, scientists and practical engineers will work hand-in-hand,” he emphasized.

According to last year’s Boeing’s forecast, in the next 20 years 17,000 pilots and 22,000 technicians will be required in Russia and the CIS. The Skolkovo center’s capacity exceeds 1,000 aviation specialists per year.