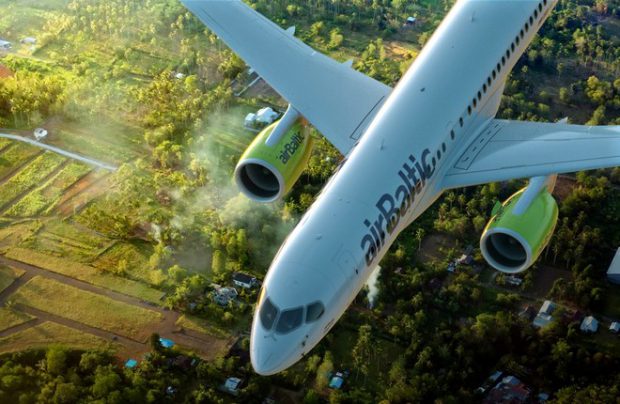 Latvian hybrid airline airBaltic earned record profits of €4.6 million in 2017, a dramatic 380 per cent improvement on the €1.2 million net income achievement of 2016.

The key to the success was the introduction of a fleet of brand new and efficient Bombardier CS300 jets, which were an instant success and helped to increase the number of passengers carried by 22 per cent to 3.5 million.

The Latvian airline, which was the launch customer for the CS300, currently operates eight CS300s and has plans for six more deliveries of the type by the end of 2018.

Encouraged by such impressive results, the airline is now ready to take the next step “by developing and improving route map and by adding more new, state-of-the-art Bombardier CS300 jet aircraft to our fleet,” reveals Martin Gauss, airBaltic’s chief executive officer.

The positive momentum has carried on in the first quarter of 2018, during which the Latvian airline transported 730,000 passengers, or 24 per cent more than in the same period last year. “We just presented the 2017 results that were the best operational results in the history of the airline, and now we have achieved a new passenger record for first quarter of 2018 too,” Gauss adds.

With 31 aircraft, comprising eight brand new Bombardier CS300s, 11 Boeing 737-300/500s and 12 Bombardier Q400 turboprops in its fleet, the airline is aiming to maintain its market leadership in the region.

“We will continue securing our position as the market leader in the Baltic region by further improving connections between the Baltic States and the rest of the world,” Gauss stresses.

Riga-based airBaltic now serves more than 70 routes from the Baltic cities of Riga, Tallinn and Vilnius. For the summer of 2018, it has introduced eight new destinations from Riga, including to Almaty, Sochi and Kaliningrad. In addition, airBaltic has launched a new direct route between Tallinn and London.

Established in 1995, airBaltic is a joint stock company. The state of Latvia is its primary shareholder, owning 80.05 per cent of the stock, while Danish businessman Lars Thuesen holds around 20 per cent through his fully-owned Aircraft Leasing firm 1 SIA.