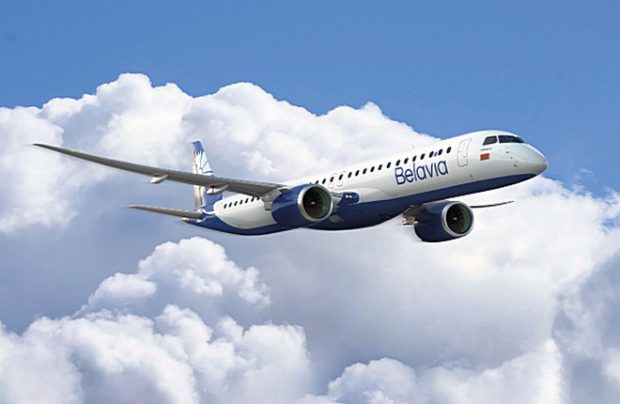 With the new type in fleet, Belavia will enjoy improved operating costs and versatility (AerCap)

Belavia, the national carrier of Belarus, has signed an agreement with lessor AerCap for the lease of three new Embraer E195-E2 aircraft, with the first delivery scheduled for December 2020 and the further two to join Belavia’s fleet in March and April 2021.

“We have a long history of working with Belavia and with the introduction of Embraer’s most advanced aircraft, Belavia will enjoy improved operating costs and versatility,” advises Philip Scruggs, AerCap’s chief executive.

The airline will operate the new aircraft in two-class layouts configured for nine passengers in business class and 116 in economy. The crossover jets will be operated throughout Belavia’s international route network, serving flights from the Minsk capital to London, Barcelona, Nur-Sultan, Munich, Paris, Sochi and Amsterdam.

“Belavia’s fleet renewal efforts have been progressing nicely throughout the last several years. In 2019 we added three new Embraer E195s and an E175, and we are expecting another E175 this spring. In December this year a brand new Embraer E195-E2 will join our fleet,” says Anatoly Gusarov, Belavia’s general director, confirming the airline’s strategy of renewing half of its fleet over the course of three years. Belavia is in the process of retiring its ageing Boeing 737CLs and is planning a replacement for its CRJ200LR small regional jets. Overall, its existing 32-strong fleet consists of two CRJ200s, four E175s, seven E195s, five Boeing 737-300s, six B737-500s and eight B737-800s.

Apart from the April delivery of another E175, which is the final aircraft of a batch contracted with Nordic Aviation Capital (NAC), two additional Boeing 737-800s are scheduled for delivery to Belavia, which is also preserving its pending lease contract for up to seven Boeing 737 MAXs in a deal which was signed in 2018. The two initial MAX deliveries were scheduled for last year, and the airline is being reimbursed for the losses associated with their delays, Gusarov reveals. The MAX deliveries are subject to the approved resumption of operations of the currently grounded type.