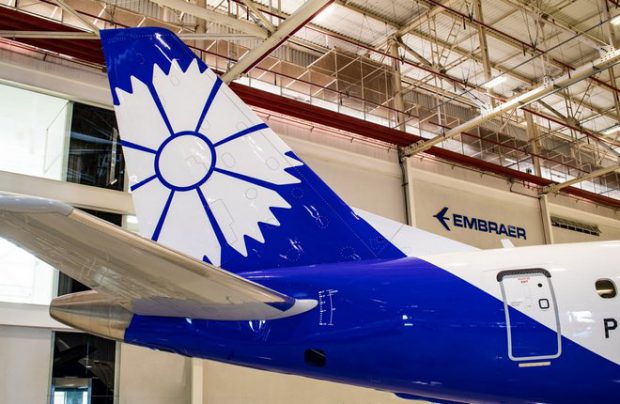 This new E175 is the first Embraer to sport the new livery of the airline, which presents the cornflower, the national symbol of Belarus, as its core image (Embraer)

With the delivery of a brand new Embraer E175LR, Belorussia’s flag carrier has kicked-off its 2018 fleet renewal initiative.

Two more E-Jets – the bigger E195 variants — are planned to join Belavia’s fleet in May and June, taking the airline’s Brazil-made fleet to seven jets by mid-summer. As a part of its fleet renewal programme, Belavia is to phase-out a single Boeing 737−300 and a Bombardier CRJ-200 later this year.

Belavia’s first direct-purchased E175 from Embraer arrived at the airline’s Minsk airport base on April 19th. The GE CF34-8E-powered E175LR (construction number MSN 721, tail number EW-512PO) has a two-class layout offering 12 seats in the business class cabin and 64 in economy. Its first revenue flight is scheduled for April 24.

Belarus’ major carrier received its first E-Jet in 2012 and, with the addition of EW-512PO, now operates three E175s and two E195s. Apart from two more previously announced E195s, also direct-purchased from Embraer, the airline is to lease an additional five brand new Embraers — the three E195s and two E175s —from Danish lessor Nordic Aviation Capital (NAC). It means Belavia’s fleet will reach a total of 12 E-Jets when the five latest aircraft join its ranks from April of next year.

The airline carried three million passengers in 2017, up 20.6 per cent on the previous year.