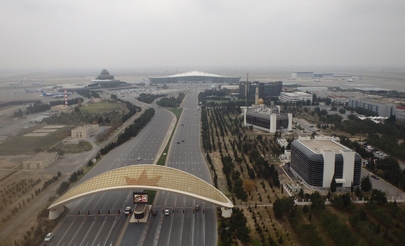 Baku’s Heydar Aliyev International Airport is well positioned to become into a major regional hub thanks to its geographic location and developed infrastructure. State-owned flag carrier Azerbaijan Airlines (AZAL), which operates the airport, has agreed with IATA on a comprehensive 10-year development plan for Heydar Aliyev. The plan is to be drafted by late February 2016.

AZAL will play a key role in creating a passenger hub at Baku. “The airport’s location is appealing to carriers,” says AZAL Vice-President and CEO Eldar Gadzhiyev. “In addition, our carrier operates a mixed fleet of different aircraft types, and is capable of any air operations. We are convinced that AZAL will contribute greatly to turning the airport into a regional hub which, we hope, will be attractive to other carriers as well.”

AZAL currently accounts for around 60% of all flights out of and into Heydar Aliyev, but the airport is interested in attracting other carriers. AZAL representative says the airport management is conducting an independent policy aimed at attracting new airlines, and that the parent company does not restrict this activity in any way. The airport is prepared to offer new operators certain optional benefits.

The two most popular destinations for passengers flying out of Baku are Istanbul and Moscow. The Turkish capital has recently become slightly more popular than the Moscow airports. Baku offers flights to 78 destinations in 38 countries.

AZAL says the airport turned into a cargo hub several years ago. Baku offers fueling and maintenance services on aircraft operated by many international cargo specialists. The airport has two cargo terminals with a combined throughput capacity of 120,000 t. One of the terminals handles perishable freights.

Cargo flights are operated from Baku to a number of countries, including China, EU states, and the US. The airport is home to Silk Way Airlines and Silk Way West Airlines, both subsidiaries of the Azeri holding company Silk Way Group. The former operates Ilyushin Il-76s and Antonov An-12s; the latter flies Boeing 747-8s. The new terminal of Baku airport can serve 6 million passengers per year (Photo by Fyodor Borisov/Transport-Photo.com)

After the opening of the new terminal the old one started serving all regional flights, which are currently handled in the airport’s southern sector. The northern sector is intended for the low-fares flights which AZAL started operating in the fall of 2015, and also for foreign low-fares airlines. In particular, Wizz Air will start flying to Baku in spring 2016.

The new terminal at Baku is equipped with advanced IT solutions. Multinational IT specialist SITA provided consultancy services during construction of the terminal, which has 40 check-in counters and a number of self check-in kiosks. Through check-in services are available to passengers.

“Silk Way Ground Handling provides check-in services to passengers flying to any destinations; the number of transit passengers using Baku is growing steadily,” Gadzhiyev says. “The terminal is designed for this; we hope that the airport’s transit capacity will even improve in May 2016. Vanderlande, the company which supplied the airport’s current baggage handling system, is now working to expand its capacity because the original design capacity for transit baggage was too low for us.”

The new terminal, just like the old one, has the arrivals and departures areas separated from each other. The new terminal also has two check-in areas and business lounges. The airport offers free unlimited Wi-Fi.

The airport management is planning to upgrade the old passenger terminal, introducing all the technical solutions used in the new building. “We need to make the two terminals capable of ‘talking’ to each other,” Gadzhiyev says. “SITA has already done a lot for us; I hope the interface between the terminals will be launched in late 2015 or early 2016.”

The airport performed exceptionally well under pressure related to the increased passenger traffic during major international events in Baku (including the EuroVision song contest and the 2015 European Games). Passenger numbers are expected to peak again in 2016, when Baku will be hosting an F1 Grand Prix.

An Open Skies accord between Azerbaijan and the EU could help Baku attract more international carriers. The two parties’ aviation authorities have been in relevant talks for many years. AZAL’s Gadzhiyev says that talks are ongoing, “but both parties understand that the matter should not be rushed, and that the terms and conditions offered to us should be studied closely.”

The first airspace liberalization step has already been made: AZAL and Eurocontrol signed an agreement in late November 2015 on setting up an international air traffic management system. This will help Azerbaijan’s AZANS air traffic control center use airspace in a more rational way thanks to the EU’s assistance with flight planning.

AZANS says Baku handles 120 to 150 aircraft movements every day. On average, 350 aircraft cross Azeri airspace daily, including transit flights. The intensity of flights peaks at between 5 a.m. and 7 a.m., and then again after 5 p.m.

All vehicles at the airport are equipped with tracking devices and only move when cleared to do so by the air traffic controllers.

In 2013, a new 66.5 m tall tower was opened at Heydar Aliyev. Before that, air traffic controllers were housed on the top floor of the new terminal, just 40 m above ground level. An auxiliary tower is nearing completion at the airport; ATC equipment is already being installed, and the new facility is expected to be put into operation in 2016.

The airport has two runways, one measuring 3,200 m by 45 m, the other 4,000 m by 60 m. It is one of the few airports in the world capable of receiving Airbus A380s. Aircraft of the type do not fly into Baku, but a Singapore Airlines A380 performed an emergency landing at the airport after losing cabin pressure some time ago. The airport is equipped with a boarding bridge for A380s. Sonic attack equipment is used for repealing birds.

Other Azeri international airports are in Nakhichivan, Ganja, Lankaran, Zaqatala, and Qabala. All of them are operated by AZAL.