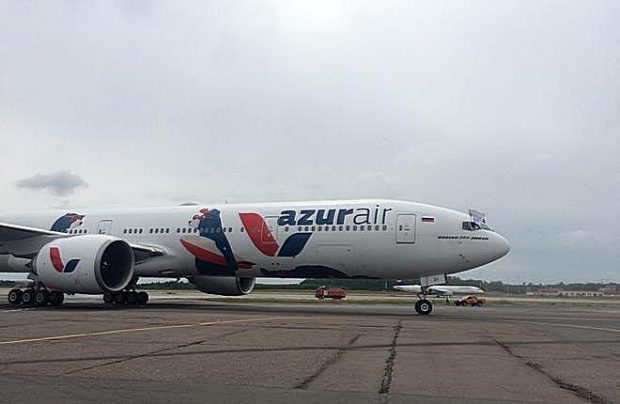 Azur Air, Russia’s largest passenger charter airline, is on track to increase its current fleet roster of 22 to 30 aircraft by 2020. Backed by its ‘strategic partner’, Turkish travel operator Anex Tour, Azur Air has already taken delivery of its first Boeing 777-300ER wide-body, the first of the type in the airline’s all-Boeing fleet.

During the forthcoming winter, the carrier intends to add three more 777s, Azur Air’s general director Yuriy Stogniy revealed at a presentation ceremony of the new-arrival airliner at the airline’s Moscow Domodedovo base airport.

The GE90-115B-powered aircraft, with the designated tail number VQ-BZY, and which offers a seating capacity of 386 in economy and 42 in business class, was previously operated by local leisure carrier VIM Airlines, which ceased operations and left the market in October 2017. It has already started service for its latest operator, operating flights from Moscow to Antalya in Turkey and Djerba in Tunisia.

“At the moment we have completed negotiations regarding three more [B777] aircraft, which will arrive from December at the rate of one per month. For the winter season of 2018/2019 we will have four Boeing 777-300ERs in our fleet,” Stogniy pointed out.

The addition of the B777s is part of a wider fleet expansion programme, which also encompasses the delivery of two more Boeing 767s this summer. “Today we have 22 Boeing aircraft in our fleet but, by 2020, we will bring this number to 28, or possibly 30,” the executive announced.

The two incoming B767s will be placed on the Russian register, a stance announced by the airline’s management in March, when Russia’s aviation authority Rosaviatsiya agreed to lift all restrictions on Azur Air’s Air Operator’s Certificate (AOC) which it had imposed a month earlier.

With the AOC in jeopardy, shareholders decided to change the airline’s top-management, whilst also announcing the prospect of registering up to 10 of its aircraft in Russia – a long-time goal of Russia’s aviation authorities. As of March of this year, out of 743 western-built aircraft then being operated by Russian airlines, only 133 were placed on the national register (123 aircraft with a capacity of less than 50 seats), whilst the vast majority were registered in Bermuda. Azur Air promised it would be among the ‘pioneers’ of this transition.

Azur Air operates from 40 airports across Russia to 20 leisure destinations around the world, utilising an all-Boeing fleet of eight B757-200s, seven B767-300s, six B737-800s and a single B777-300ER. Moscow Domodedovo remains its main base, with some flights operated out of Sheremetyevo. However, recent reports have speculated that the airline may decide to switch its capital city base airport to Vnukovo. When faced with a direct question from Russian Aviation Insider, Yuriy Stogniy said this strategy was “not ruled out.” He added: “We work in line with the demands of our passengers and make decisions where to base aircraft according to their best interests.”

During first five months of 2018 Azur Air transported 1.37 million passengers, up 23 per cent on the same period last year.