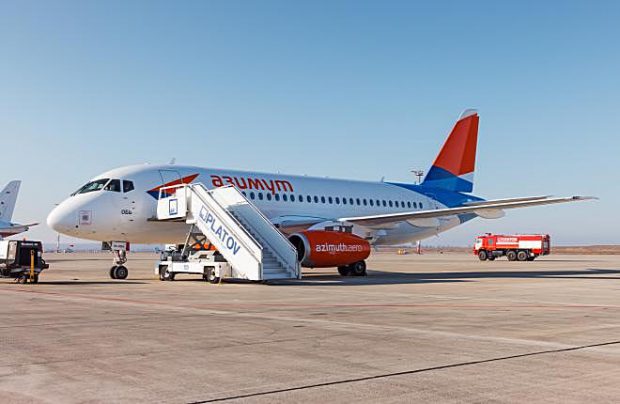 Russian regional carrier Azimuth Airlines has taken delivery of its final Superjet 100 (SSJ100) for this year – the 11th in its all-SSJ100 fleet. The latest regional jet (registration RA-89121) addition, which is configured with 100 seats, was produced in 2018 and joined the operator on December 5.

The Rostov-based airline has now brought in three SSJ100s during 2019 – two having entered commercial service with the world’s only all-Superjet 100-operator in April and October. According to the company’s business expansion plan, a further two SSJ100s are scheduled to join the airline’s fleet next year. By 2022, Azimuth Airlines is planning to bring its entire fleet to 16 regional jets of the type. All its aircraft were delivered under lease contract agreements with Russia’s State Transport Leasing Corporation (GTLK).

The progressive fleet and route network expansion has placed Azimuth among the fastest growers in the Russian passenger airlines market in 2019. In the January through October period, the airline carried some 1.03 million passengers, a 96 per cent improvement on the same period of last year.

To support its further development, the carrier’s management is also evaluating larger aircraft types, such as the Airbus A220-300 (formerly the Bombardier CSeries).

Another significant milestone in the dynamic young airline’s brief history is the launch of international services. According to Russian regulations, an airline may commence international services only after it has demonstrated at least two years’ of successful domestic operations. In October 2019 Azimuth finally crossed that qualifying mark by winning such approval from Russian aviation authority Rosaviatsiya and, on December 1, it operated its first international flight from its Rostov Platov airport base to Tel Aviv in Israel. Prior to that, the airline had operated flights across Russia and to some member countries of the EuroAsian Economic Community which, as well as Russia, comprises Armenia, Belarus, Kazakhstan and Kyrgyzstan.

By the end of this year Azimuth expects to have served 1.2 million passengers.