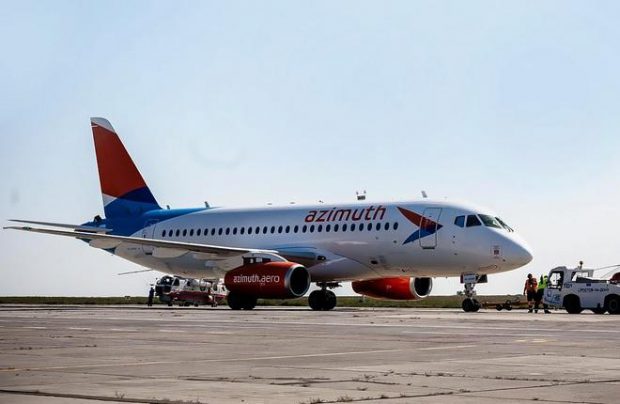 The newly delivered Superjet is a long-range version (Azimuth Airlines)

Russia’s startup carrier Azimuth Airlines has taken delivery of its fourth Sukhoi Superjet 100 (SSJ100). The new aircraft, registration code RA-89085, landed at the airline’s base airport of Rostov-on-Don on September 29. It was ferried from Ulyanovsk following a paint job, an Azimuth spokesperson told Russian Aviation Insider.

The newly delivered airliner, a long-range version of the Russian-made regional jet, is on lease from State Transport Leasing Corporation (GTLK), just like the previous three SSJ100s in Azimuth’s fleet that were delivered earlier this year.

Azimuth Airlines has four more SSJ100s on firm order, and expects to receive these by next April. The operator also has two letters of intent, with GTLK and with Superjet manufacturer Sukhoi Civil Aircraft, for four aircraft each. The airline’s fleet might thus reach 16 airframes by 2020.

The carrier received its air operator’s certificate on August 18, and commenced operations on September 21 from Moscow’s Vnukovo airport. Rostov-on-Don is the airline’s primary base. When that closes in December 2017, Azimuth will relocate to Rostov’s new airport, Platov.

Azimuth has announced that its route network will originally include destinations in Russia’s Southern and North Caucasus federal districts, which it will eventually link to other regions across the country. The airline expects to break even within three years. Azimuth expects its traffic to amount to between 2 and 3 million passengers per year.