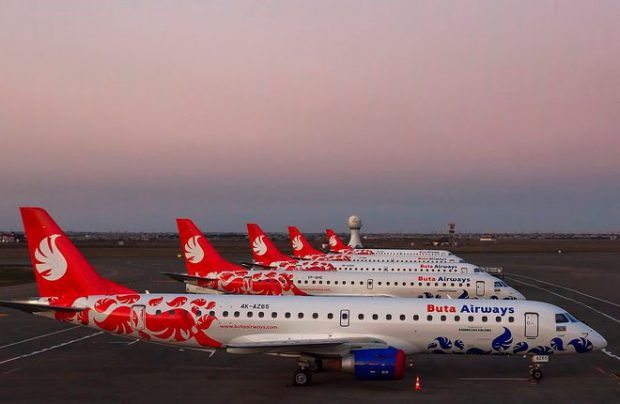 As part of the expansion of its flight training capabilities, Azerbaijan Airlines (AZAL) has purchased an Embraer E190 full-flight simulator (level D) from FlightSafety International in a contract worth US$11.5 million, the company has revealed.

The equipment is to be installed at the Azerbaijan National Aviation Academy’s Flight Training Centre and will be used to provide type rating and re-current training of the flight crews of AZAL’s Buta Airways low-cost division which operates the type.

The move is a change to the original plans, which saw a letter of intent signed with L3 Technologies for both Embraer E190 and Boeing 737 MAX simulators in 2018. AZAL does not explain the reasons for the change of equipment supplier, which may be associated with the airline’s reluctance to sustain its earlier plans for grounded Boeing 737 MAX.

“The National Aviation Academy (NAA) is the training unit of Azerbaijan’s civil aviation personnel,” comments AZAL’s president Jahangir Asgarov. “Therefore, we are constantly working on expanding its material and technical base. Together with the rector of the NAA, academician Arif Pashayev, the decision was taken to create a second building on the territory of the Academy for a simulator complex, the construction of which is nearing completion. It will house flight simulators for the Embraer E190 and Boeing 787 Dreamliner aircraft.”

The Flight Training Centre targets not only its main customer’s training needs, but also offers services to other airlines in the region. Founded in 2010, the AZAL Pilot Training Centre offers more than 300 theoretical and training programmes, which are attended by some 7,000 students each year. The latest acquisition of the E190 simulator will join the four existing Level D full-flight flight simulators for the Airbus A319/A320, the Boeing 757/767, and the ATR-42/72 types.