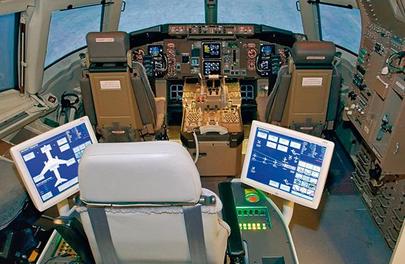 In the wake of the collapse of the Soviet Union, Azerbaijan commenced training of its own commercial aviation staff in 1992, after it became independent. A government decree regarding creation of the National Aviation Center—renamed the National Aviation Academy (NAA) in 1994—marks the beginning of the organization that now trains personnel for the national carrier AZAL as well as for foreign airline customers.

The training organization, which is affiliated with AZAL, enables Azerbaijani personnel to be trained in their own country without resorting to schools in St. Petersburg, Moscow or Kyiv. The Academy’s first graduate class had 85 students in two majors. At present, there are twenty majors requested by AZAL, and the number of newly trained specialists that start their careers annually after graduating from the Academy reaches 2400, NAA’s vice-chancellor Adalyat Samedov told Russian Aviation Insider.

The NAA today is a modern complex for scientific and practical training activities, which provides academic, supplementary and vocational education programs. It is a registered ICAO training organization, as well as a member of the European Civil Aviation Conference (ECAC) training network.

The Academy is also certified by the Interstate Aviation Committee and Azerbaijan’s State Civil Aviation Administration. It holds the status of an IATA regional center.

Graduates of the NAA find employment at both AZAL, which includes the passenger carrier and the national ATC service provider Azeraeronavigation, and Silk Way Group. About 70% of all of AZAL’s pilots are NAA graduates, Samedov claims. Silk Way Group consists of two cargo airlines, a helicopter operator, a business-aviation unit and a maintenance provider. The latter, Silk Way Technics, maintains the group’s fleet as well as AZAL’s aircraft.

Another direction of the NAA’s activity is additional training, recurrent and refresher courses for over 120 disciplines. Annually, 350 to 550 courses attract up to 5,500 specialists.

An IATA authorized training center was created in 2013 jointly with the international association. It provides four training programs: hazardous materials procedures, cabin crew, aviation security and cargo transportation, the graduates of which receive international-type certificates. Examinations are done via IATA’s head-office in Montreal, which afterwards issues the certificates.

The NAA is intending to extend cooperation with IATA by offering more programs, and is even considering organizing a full-scale two-year training program. The graduates “will receive a diploma, acknowledged anywhere in the world, not just a certificate,” Samedov explained.

AZAL’s simulator center has been providing simulator training for AZAL’s and other airlines’ pilots since 2010. It disposes of full-flight Level D simulators for Airbus A319/A320, Boeing 757/767 and ATR 42/72 produced by Thales with Rockwell Collins visual system. The simulators are certified by EASA and Azerbaijani authorities.

Apart from that, there is a simulator for the cargo Ilyushin Il-76 aircraft, designed by the Russian company TAV (formerly Transas). The simulator, built in 1987, has been thoroughly renewed, and is equipped with a hydrostatic motion system and a modern visual system.

The Mil Mi-171 simulator made by Ukrainian company NPP Avia is used for training helicopter pilots.

Thus, the simulator center caters to AZAL’s pilot training as far as Boeing 757-200/767-300, Airbus A319/A320 are concerned. The national carrier also operates E170/E190, Boeing 787-8, and Airbus A340-500, so the Academy is considering expanding its simulator range and is already negotiating with Embraer. It may also start training technicians for Boeing 787-8.

The Il-76 is operated by Silk Way Airlines. Its subsidiary, Silk Way West Airlines, flies Boeing 747s and its pilots train in Luxembourg with Cargolux. But all of the preparation courses are done in Baku, the carrier’s top-manager Kamran Gasimov said. Silk Way Business Aviation has Gulfstream business jets and ATR-42s in its fleet. Silk Way Helicopter Services operates western-built helicopter models and Mi-171.