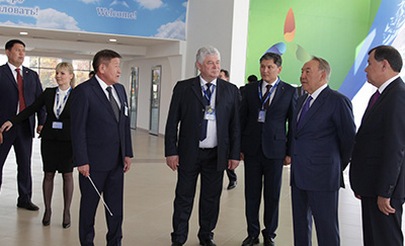 Aulie-Ata airport at the town of Taraz in Kazakhstan has completed reconstruction of its passenger terminal. The 6,800 sqm – terminal can serve simultaneously up to three arriving and departing flights with the capacity of 600 passengers per hour, and up to 650,000 passengers per year.

Out of the project’s US $5 mln budget, $2,8 mln was lent by Kazkommertsbank under the auspices of a 7-year state support program. Bank of Development of Kazakhstan provided US $2.1 mln.

The airport’s reconstructed runway was used for the first time in March by Iraq Airways cargo Boeing 747-200F, which carried goods from Taraz to Bratislava. Commenting on the occurence, the airport’s chairman Daulet Khamzin announced that the company is working on attracting transit traffic (both cargo and passenger) to Aulie-Ata. “We are planning to turn the airport into a multimodal transport hub, which will compliment the existing hubs in Almaty, Astana and Karaganda. To achieve this, we colaborate with logistic companies that specialize in cartage and railway transportation,” he said.

First passengers went through the airport’s new terminal at the beginning of October. Previously the airport served only two destinations, Astana and Almaty. In February a new route – to Pavlodar via Astana – was opened by SCAT airline, the Aulie-Ata’s stakeholder. The plans call for direct flights to Moscow, Aktau, Atyrau and summer charter fligts to Antalya and Dubai.

The airport was established in 2008. The reconstruction, which implied the runway’s extension to 3,500 m, as well as taxiway and tarmac renewal and equipment upgrade, resulted in the aiprot being approved for all types of aircraft without restrictions. The construction of the terminal began in 2012, initiated by SCAT, wghich later had to give up on the project for lack of funds.

According to Business Kazakhstan newswire, Aulie-Ata plans to focus on serving transit flights on their fuel stops. This is currently the case with transit flights from Tajikistan to Russia and several destinations from India and Arab Emirates to Europe. It also serves as alternate airport for Almaty, Bishkek, Tashkent, Chimkent and Astana. Its ambition is to develop a niche on the cargo transportation market.