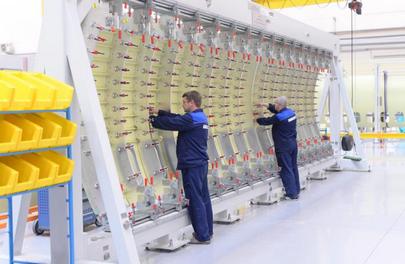 Assembly of prototypes for the Irkut MC-21-200 narrowbody airliner will begin in 2017. Ulyanovsk-based Aviastar-SP plans to deliver airframe elements for the first two test examples of this shortened version to Irkutsk Aviation Plant next year. It will also ship a set of elements for another prototype of the MC-21-300 baseline version.

Aviastar-SP is the largest supplier under the MC-21 program. The company manufactures sets of fuselage panels, ventral body and APU compartments, as well as doors and complete empennages for the type.

Aviastar-SP has recently started fuselage panel deliveries for the third MC-21 prototype to the Irkutsk enterprise, which is responsible for final assembly. The rest of the fuselage components for this particular airframe will be delivered by year-end. The Ulyanovsk company is also preparing to ship the empennage of the second, ground-testing prototype, which is to be assembled by the end of this summer.

The first MC-21-300 prototype was rolled out earlier in June; the first flight is expected to take place in 2017. Apart from the first two prototypes, the Irkutsk plant is building three more; one of these will be used in flight tests, and the other two will be endurance-tested on the ground. Aviastar-SP says it will have built a full set of components for the fourth prototype by the end of the year.

Aviastar-SP runs a dedicated MC-21 component assembly shop, and is readying its fuselage panel and empennage assembly line for series production. The company is planning to organize on-the-job training courses to speed up personnel conversion to MC-21 production.

Kommersant daily reported earlier that OEM Irkut Corporation aims to build four production MS-21s by 2018. Production rate is expected to reach 20 airframes by 2020, and around 70 by 2033. The company’s existing production capacities allow for building 10 mc-21 aircraft annually. The OEM plans to switch to two-shift working days and make use of reserve capacity in order to double this figure.

Irkut’s portfolio of firm orders for the type currently stands at 175 aircraft: 85 from Avia Capital Services (of which 50 are intended for Aeroflot), 50 from Ilyushin Finance Co., 30 from VEB Leasing, and 10 from IrAero Airlines. MC-21-300 deliveries are expected to begin in late 2018 to an Aeroflot Group carrier.