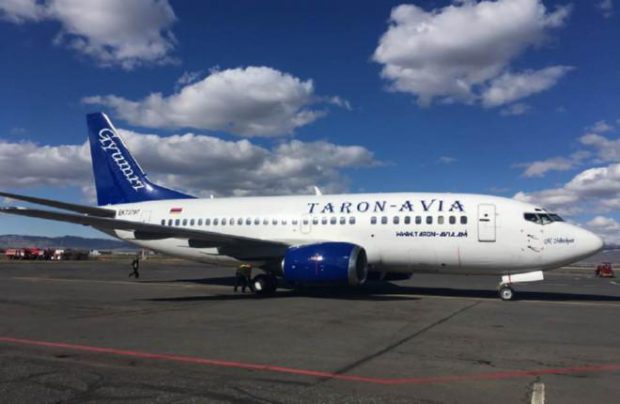 Privately-owned Armenian carrier Taron-Avia is gearing up to re-enter the Russian-Armenian air services market. Two years after the company first announced the plan, this time it appears that the management has prepared itself more thoroughly for the move. On April 10, a Boeing 737-500 repainted in the Taron Avia livery arrived at Shirak airport outside the city of Gyumri, where the airline will be based. The airplane, which was previously operated by now-bankrupted Air Armenia, sports the word “Gyumri” on the vertical stabilizer.

Taron-Avia has launched a new website, obtained the Russian Transport Clearing House’s permission to use that organization’s blank forms for its air tickets, and taken some other steps in the run-up to the launch of commercial operations.

The carrier is expected to commence flights to Russia in late April. The list of destination airports includes Krasnodar, Rostov-on-Don, and Samara’s Kurumoch airport.

The airline deliberately chose Shirak as its base airport (Armenia’s other operational airport, Zvartnots, serves the capital city Yerevan). First, on December 31, 2014 the Shirak management waived the surcharge of 10,000 dram ($21.39) per outbound passenger; on January 1, 2017 the airport reduced the air navigation service fee by 50%, and meteorological support is provided free of charge. “Having taken these advantages into consideration, Taron-Avia decided to operate from Shirak,” a representative of Armenia’s General Department of Civil Aviation told Russian Aviation Insider. Second, Gyumri is the hometown of Taron-Avia owner and CEO Garnik Papikyan.

Apart from the newly delivered Boeing the carrier has two more 737-500s, which it used to sublease.

If everything goes to plan, Taron-Avia will lbecome Armenia’s second carrier to offer regular services to Russia. Last summer Zvartnots-based airline Armenia broke onto the Russian market. Armenia management declined to comment on the new carrier’s plans but offered their congratulations.