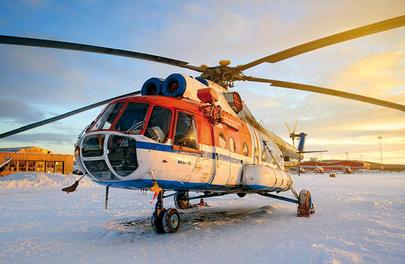 Life in Murmansk Region, in northwestern Russia, is hard to imagine without air transport. Over the past two decades, the Kola Peninsula has been served by a string of air carriers that have periodically run into financial hardships, changed names and hands. The current local operator, set up six years ago by the regional authorities and Vertical-T air company, was rebranded Arktika last summer. The carrier’s long-term strategy involves taking part in the development of the Northwest Passage and establishing presence elsewhere in the north of Russia.

Around 70% of Murmansk Region’s area lies in the Kola Peninsula. The region stretches some 550 km east to west and 400km north to south.

In the Soviet times, this area was served by a local subsidiary of Aeroflot, which primarily operated Antonov An-2 biplanes, and Mil Mi-2 and Mi-8 helicopters. When the change of power came in 1991, that subsidiary spun off into a separate operator, retaining control over the regional airport network, and acquired four new Tupolev Tu-154M jets within a year (the type was retired in Murmansk Region in 2000). The newly established carrier went belly-up in the fall of 1994, and its assets subsequently split between the managing company of Murmansk airport and Murmansk Airlines. The latter folded under competition in 2000, and its fleet was sold out.

Around the same time, the Murmansk Aviation Company began operations in the region. By the time its air operator’s certificate was cancelled in 2009, the carrier‘s fleet comprised several An-2s, Mi-2s and Mi-8s. On January 15, 2010, the Murmansk Aviation Enterprise registered with the headquarters in the city of Severomorsk. The company obtained its air operator’s certificate in February 2012; in July 2015, it was rebranded as Arktika Airlines. According to the Federal Air Transport Agency, Arktika’s fleet comprised of a single Mi-8AMT, two Mi-8MTV-1s and Four Mi-8Ts as of early April, of which the operator owned two helicopters.

Vyacheslav Ilyushin, a member of the Arktika board of directors, says the carrier was founded at the initiative of the regional governor of the time, who asked Vladimir Dnitriyenko, then general manager of Vertical-T air company, to create a regional operator that would provide air services across the Kola Peninsula. Ilyushin served as Arktika general manager until mid-March 2016, and was then replaced by Sergey Checherov, former deputy commander of the Northern Fleet’s naval aviation.

At present, Arktika mainly transports residents of Kola Peninsula and serves businesses represented in Murmansk Region. For example, the operator performs short-haul passenger flights under contracts with two regional districts. Arktika operates eight major helipads in the region (out of around 28). Of these, the key ones are Lovozero (situated by a lake of the same name, 125 km southeast of Murmansk Airport) and Umba (on the coast of the White Sea’s Kandalaksha Gulf, 245 km away from the regional capital city).

Arktika uses these helipads to serve the region’s Lovozero and Tersky districts, respectively. The carrier also operates flights in the interests of the regional hospital, long-distance telephone provider Rostelecom, the nationwide sea-port managing company Rosmorport, the regional electoral commission, and other customers.

These operations are either seasonal in nature or too low-scale to provide Arktika with a steady workload. For this reason, the operator is planning to take a more active part in the year-round efforts to develop the Northeast Passage, and also in offshore projects in the north of Russia.

“Our operations within the Kola Peninsula are distinctly seasonal: there is virtually no demand for helicopter services in winter,” Ilyushin remarks. “On the other hand, we need to maintain our personnel and equipment all year long, so we have set the goal of turning ourselves into a leading helicopter operator first in northwest Russia, and then within the government programs to develop the Arctic territories. This is why we decided to rebrand the Murmansk Aviation Enterprise as Arktika. And, of course, we are not overlooking the offshore projects. We already have the experience operating one Mi-8 in the interest of [Russian oil giant] Rosneft.”

Ilyushin says operators from other Russian regions increasingly come to Murmansk Region owing to the universal slump in demand for helicopter operations. However, Arktika has a number of advantages over the incomers. First, its pilots can boast years of experience flying in Kola Peninsula (often in adverse weather conditions) and operating from offshore oil rigs and Atomflot icebreakers, which are based at Murmansk. Second, the carrier has its own maintenance base, complete with a hangar, at Murmansk airport, and its technicians are cleared to perform all forms of periodic maintenance on Mi-8 helicopters.

Arktika is also intent on expanding within Murmansk Region. At a March meeting of the regional administration’s working group for the development of air transport in Kola Peninsula, Aviasoyuz Association of Regional and General Aviation (which holds a 25% share in Arktika) presented the Helifish Aero project to promote the region as an all-season destination for international ecotourists, active holidaymakers and fishermen. As part of that project, Arktika is planning to take delivery of at least two Mi-2 helicopters in a new special livery from Moscow Aircraft Repair Plant.

Asked about the number of operational hours flown by Arktika’s helicopters in 2015, Ilyushin replied cautiously: “The figures are so far quite modest.” Earlier, he reported that the Arktika fleet had clocked a total of some 2,000 hours flying in 2014, of which nearly 700 hours fell to subsidized flights to carry some 7,000 passengers within Kola Peninsula.