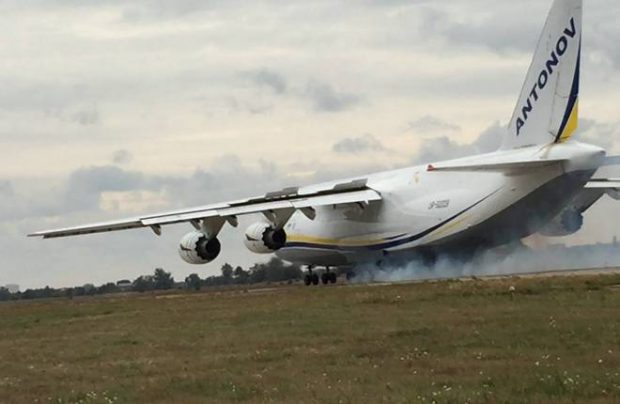 Ukraine’s airframer Antonov made a first step to minimize the reliance on Russian suppliers for its super heavy An-124 Ruslan and An-225 Mriya freighters. The manufacturer has already tested new tires developed for these aircraft by UK company Dunlop Aircraft Tyres that is to replace Russian-made equipment.

The trials were performed at Antonov test base and included flights of An-124-100M-150 aircraft with take-off weights of 340 t, 360 t and 402 t with different CG limit positions. The take-offs and landings were performed within the limits of expected operational conditions. All the tests were conducted in the presence of Dunlop Aircraft Tyres specialists.

“Our cooperation on Ruslans with new tires also started successfully, as confirmed by the results of the tests,” noted Oleksandr Kotsiuba, Antonov’s president, adding that advantages of Dunlop Aircraft Tyres products include authorization by EASA and competitive prices. The Ukrainian company already has a good experience of cooperation with the UK manufacturer as Dunlop tires are used on the An-148/An-158 regional jets.

The plans to westernize Antonov heavy airlifters were announced at the end of 2015 as a reaction to Kyiv plans to cut military ties with Moscow due to deterioration bilateral relations. Besides the tires Antonov plans to find news suppliers for brakes and avionics. The new equipment is to be installed on one of the aircraft during heavy maintenance checks.

The subsidiary Antonov Airlines currently operates seven An-124s and one An-225.