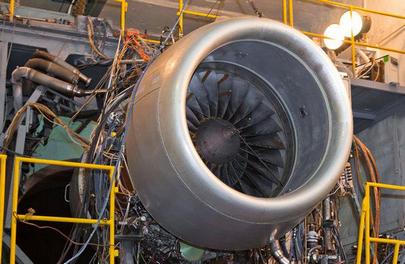 On February 5, an An-178 prototype, with the new engine mounted on its wing, made its first flight, Antonov’s spokesperson told Russian Aviation Insider. As for the second engine in the power plant, engineers chose D-436-748, which powers An-148/158 aircraft.

The new engine took to the skies two months after its first start on December 9 at the facility of Ivchenko-Progress, which designed the engine in cooperation with another Ukrainian engine-maker, Motor-Sich.

The upgraded engine has increased take-off thrust: 7010 kg as compared to the predecessor, D-436-148, which has a take-off thrust of 6570 kg.  Because the fan casing was made larger, an increased volume of air passes through the engine. Additionally, a better noise insulation system was developed.

The first An-178 prototype started a flight test program in May 2015. The second prototype is dedicated to fatigue testing.

Serving as the transport version of the passenger An-148, the new An-178 aircraft is capable of carrying about 18 tons of cargo. Its launch customer is Azerbaijan cargo carrier Silk Way Airlines, which signed a LOI for 10 aircraft. A similar letter of intent for 30 aircraft was signed in December 2015 with a Saudi Arabian customer.