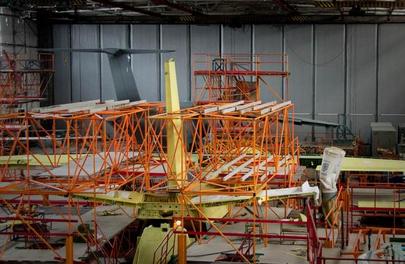 Antonov assembles the first An-132 airframe (Photo by Anotonov)

Ukrainian Antonov State Company has reported that it has completed assembly of the first airframe of An-132 regional turboprop demonstrator. The An-132 program is being developed jointly with the Ukrainian state-owned company and partners from Saudi Arabia—King Abdulaziz City for Science and Technology and Taqnia Aeronautics.

Antonov is expecting the delivery of PW150A engines from Prett & Whitney Canada sometime this month, while it is counting on completing assembly of the aircraft and rolling it out before the year’s end. Antonov has not announced its plans for the first flight yet, although it is expected that after a series of test flights, the aircraft will be demonstrated to potential Saudi customers. After completion of these flights, the assembly line of the aircraft will then be set up in Saudi Arabia.

The An-132, which is developed on the An-32 platform, is a versatile short- and medium-haul cargo aircraft. Its cargo cabin may be configured to support different tasks. Antonov claims that the aircraft will cruise at up to 9,000 m and reach a speed of 500 km/h. Its useful load will be 9.2 tons.

According to Antonov, operators in Southeast Asia and Latin America have also expressed interest in this aircraft.