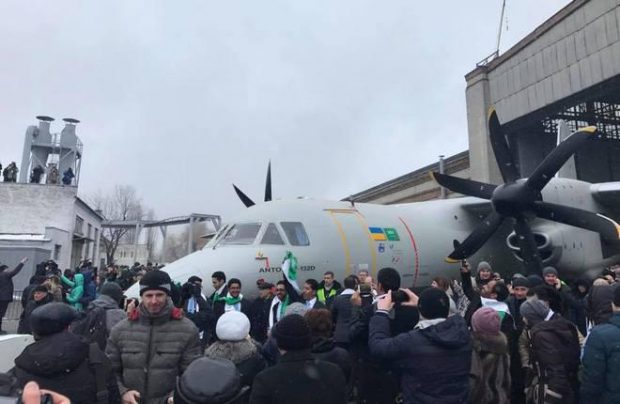 Ukraine’s aircraft manufacturer Antonov rolled out the first prototype of the new twin-engine An-132 turboprop. The aircraft development started the year-and-a-half ago, the assembly of the first prototype lasted one year. The aircraft is expected to be presented to potential customers including the program’s major investor – Saudi Arabia, in spring of next year, reported Interfax-Ukraine news agency.

An-132 is a deep modernization of the 40-year-old An-32 transport aircraft. The improvements include new avionics from the American manufacturer Honeywell, along with British-made Dowty R408 propellers, and an integrated air system from Liebherr-Aerospace Toulouse. The aircraft will be powered by Pratt & Whitney Canada PW150 engines.

Infrastructure for the An-132’s assembly is already being put in place in Saudi Arabia. Two Saudi participants in the project, Taqnia Aeronautics and King Abdulaziz City for Science and Technology, are expected to take over production of the aircraft once the technology is in place.

The aircraft’s cruising speed is estimated at 500 km per hour, with a maximum altitude of 9 km and a carrying capacity of 9.2 tonnes.

The Ukrainian company expects that the market will demand 260-290 of such aircraft by the year 2035. Potential operators of the aircraft include carriers from Africa, Southeast Asia, the Middle East, and Latin America.