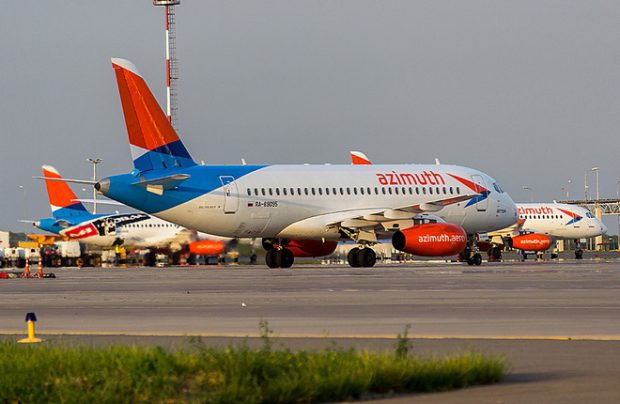 Azimuth Airlines is the world's only operator of SSJ100-only fleet, which is expected to reach 16 aircraft by 2022

In tune with previously revealed plans, Azimuth Airlines, the world’s only all-Superjet 100 operator that was launched just two years ago, has reached breakeven point in the third quarter of 2019, thanks mainly to state subsidies and high aircraft dispatch reliability.

“We are glad to see our business plan is corresponding with reality,” Vitaly Vantsev, co-owner of the airline, asserted in a recent interview with the state-run Rossya-24 TV news-channel. “In the third quarter of 2019, for the first time in its history, the airline achieved operational profit,” he added.

According to Vantsev, the carrier’s seat load factor approached 85 per cent. “This [Azimuth Airlines] project is a rather challenging one because we operate a fleet that consists solely of Russian-made [SSJ100] aircraft and 80 per cent of our routes connect regional city-pairs, avoiding Moscow,” he pointed out. Azimuth currently operates a fleet of 11 regional jets of the type, and plans to grow it to 16 by 2022. All its aircraft were delivered under lease contract agreements with Russia’s State Transport Leasing Corporation (GTLK).

“We are quite happy with the Superjet. Despite the criticisms we’ve heard, which focus on the aircraft type, we have now reached a 99.8 per cent dispatch reliability level,” Vantsev insisted.

With the launch of operations at the end of 2017 and currently ranking 18th in the air passenger league table of Russian airlines, Azimuth Airlines is located in the south of Russia with bases at the airports of Platov (Rostov-on-Don) and Pashkovsky (Krasnodar).

In 2019 the Russian government allocated 7.8 billion roubles (US$122 million) to support domestic airlines serving a total of 242 regional city-pair routes. More than 30 Azimuth routes (out of its 58 in total) are supported by this initiative. Moreover, incomes from these routes have been exempted from VAT.

Another benefit provided by the Russian government to bolster the attractiveness of the nation’s domestic aircraft manufacturing industry, is the partial compensation of the commercial loans which aircraft operators require to lease Russian-made aircraft types through domestic state-owned leasing companies. All these factors, along with cost-effective management, have contributed to Azimuth reaching the breakeven target.

The progressive fleet and route network expansion has also placed Azimuth among the fastest growers in the Russian passenger airlines market in 2019. In the January through October period, the airline carried some 1.03 million passengers, a 96 per cent improvement on the same period of last year. By the end of this year, Azimuth expects to have served some 1.2 million passengers