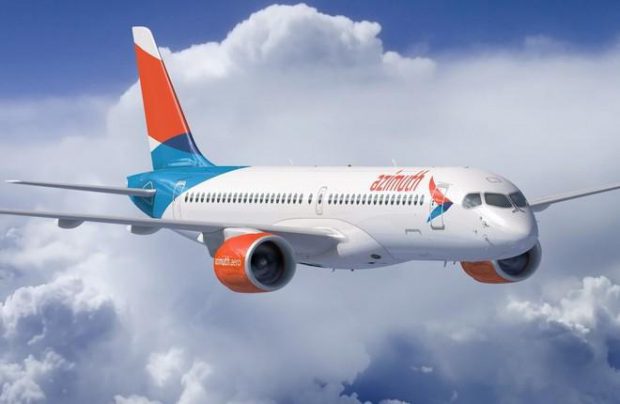 Azimuth Airlines, world’s only carrier whose fleet comprises exclusively of Russian-made Superjet 100 regional aircraft, will become a new Airbus operator in Russia, with six A220-300 aircraft on lease from Air Lease Corporation (ALC). Deliveries are scheduled to start in mid-2022 and stretch through 2024. Azimuth Airlines will also be the first A220 operator based in Russia. The news was revealed during the ongoing Moscow air show MAKS-2021 (July 20-25).

All aircraft will feature a single-class cabin layout with 148 seats. The airline, which describes itself as ‘a carrier of the south of Russia’, plans to operate A220s from its bases in Rostov-on-Don, Krasnodar and Mineralnye Vody.

Russian Aviation Insider first learned that the airline is interested in the bigger aircraft in 2019. With almost 50 per cent more capacity and range of 6,390 km (versus SSJ100LR’s 4,200 km ) the A220 is not competing with Superjet, Azimuth’s general director Pavel Ekzhanov insists. Instead, the new type provides Azimuth with an opportunity to expand to more domestic destinations, including flights to Siberia and international routes to the CIS, Middle East and European destinations.

In the meantime the airline proceeds with its SSJ100 fleet expansion plans. Azimuth has committed to Russian-made regional jets by singing Letter of Intent at MAKS for ten more SSJs to be delivered until 2026.