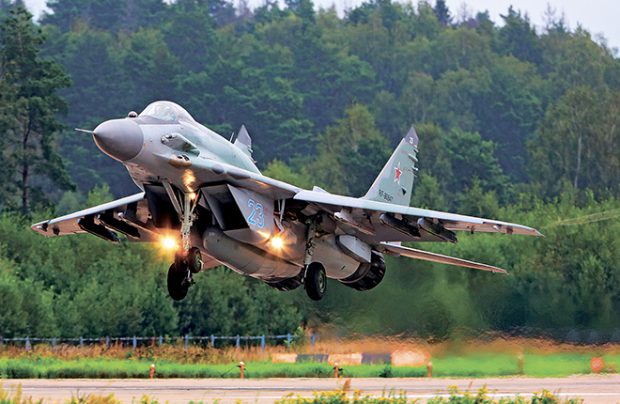 Lighter MiG fighters are obviously out of favor

In the two years since the previous MAKS, Russia’s United Aircraft Corporation (UAC) has continued to actively build fighters and combat trainers for the country’s Aerospace Forces and Navy.

The largest production runs were for Sukhoi Su-30SM fighters, at 40 airframes; for Su-34 tactical bombers, at 32 aircraft; and for the newest Su-35S fighters, at 24. As for the Mikoyan MiG-29 family of fighter aircraft, 24 carrier-based MiG-29Ks were contracted by the Navy. The Aerospace Forces received 16 MiG-29SMTs and two MiG-29UMBs.

The Defense Ministry continued to order new combat and training aircraft, but in much smaller numbers than back in 2012, the year when a record amount of orders were placed as part of the state armament program through 2020, which had been adopted in 2011.

The primary beneficiary of the new orders was UAC subsidiary Irkut Corporation, which was contracted to build 36 Su-30SMs. Of these, 28 were destined for the Aerospace Forces and another eight for the Navy. Together with the newly ordered warplanes, the Defense Ministry has ordered a total of 116 of the type since 2012: 88 for the Aerospace Forces and 28 for the Navy.

In April 2016, Irkut received an order for 30 Yakovlev Yak-130 combat trainers. In January of that year, Sukhoi was contracted to deliver 50 Su-35S fighters over the next five years. Russian Aircraft Corporation MiG, for its part, has not received any orders from the Russian military in the past several years.

It is therefore apparent that the Russian Aerospace Forces prefer to procure heavy fighter jets of the Sukhoi Su-30/34/35 families, while light fighters of the MiG-29 family have fallen out of favor. This new “big country, heavy fighter” concept replaces the Soviet approach to warplane procurement, when about a third of all fighters on order were complex and expensive heavy jets and the rest were light front-line fighters.

That MiG has been contracted to deliver 16 MiG-29SMT fighters in the past two years is likely not a sign of demand for such warplanes on the part of the Aerospace Forces but rather an indication of the government’s desire to support the planemaker, which is currently facing financial difficulties and having difficulty retaining personnel.

The procurement program through 2020 aims to meet 80% to 90% of the Aerospace Forces’ tactical aviation requirements. The next program will likely have a smaller budget, and is expected to be focused more on arming the Ground Troops and the Airborne Forces. This leads one to believe that there will be no massive acquisition of fighters beyond 2020; future procurement efforts will likely be focused on military transport aviation.

In addition, the next program is expected to direct significant funds towards resuming production of the profoundly modernized Tupolev Tu-160M2 strategic bomber. Procurement of fighters will apparently go down dramatically, even though small batches of Su-34/35 warplanes might yet continue to be built for the Aerospace Forces, and of Su-30SMs for the Navy.