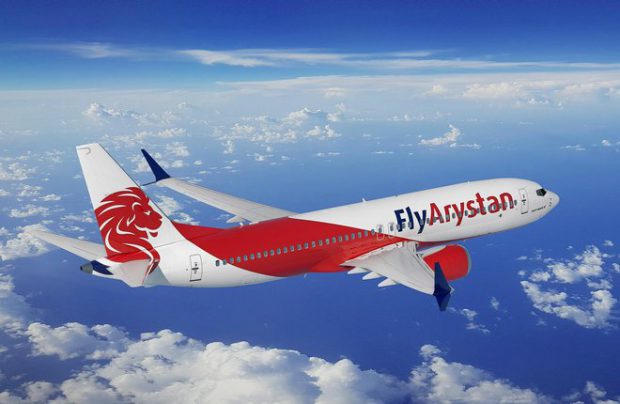 Air Astana is to order 30 Boeing 737 MAX 8 aircraft to serve as the backbone of its recently launched low-cost carrier (LCC) daughter airline FlyArystan, according to a surprise 2019 Dubai Airshow announcement made jointly by the Kazakh flag carrier and Boeing.

The companies today signed a letter of intent for the 30 new aircraft, each configured with 189 seats, with a list price value of US$3.6 billion. The airline said in a statement that 15 are to be purchased with the remainder taken on lease deals. The deliveries may commence in the second half of 2021, Russian Aviation Insider‘s correspondent reports from Dubai.

Currently, both Air Astana and its low-fare division do not possess a single narrow-body Boeing aircraft between them. FlyArystan operates three Airbus A320ceos, and is expecting the delivery of a fourth this month. According to previously announced plans, within the next year, the Kazakh airline was hoping to bring its fleet size to 10 aircraft and to have at least 15 units by 2022 – all of them A320s.

As recently as October 31, Zhanar Zhailauova, FlyArystan’s marketing and sales director, advised Russian Aviation Insider: “As for the [FlyArystan] fleet portfolio, we have now decided that this will be the only type – the Airbus A320 in a 180-seat configuration. For a low-cost airline, it is important to have a single type of aircraft in its fleet. We decided that Airbus is so far the best option for developing low-cost air transportation in Kazakhstan. Perhaps there will be some changes, but now I can’t comment on them. So far we have plans to use the Airbus A320ceo.”

Since starting operations in May 2002, Air Astana has grown its business from its Almaty and Nur-Sultan (formerly Astana) hubs, sprouting a network that serves major cities across Kazakhstan, central Asia, Asia, China, Europe and Russia. It operates a growing fleet that includes the Boeing 757, 767, Embraer E190 and the Airbus A320 family, including neos.

Air Astana launched FlyArystan in May in order to become more competitive in the growing low-cost segment. The Kazakh company reveals that the new airline has seen strong ticket sales in just a first few months of operation. The plan is to expand the fast-growing domestic network and with international services to Moscow commencing next month.

“Since its launch in May this year, FlyArystan has exceeded all expectations and it is clear that low cost air travel has a great future in Kazakhstan and central Asia,” Peter Foster, president and chief executive of Air Astana said in a statement. “Air Astana has had a strong relationship with Boeing ever since the airline started flying in 2002 with a pair of B737NGs. Today we operate both B757s and B767s and we believe that the MAX will provide a solid platform for the growth of FlyArystan throughout our region, once the aircraft has successfully returned to service.” The Boeing 737 MAX has been grounded since March 2019 following two fatal crashes.

“We look forward to working with Peter and his team to finalise an agreement that meets their fleet and operational requirements,” said Stan Deal, president and chief executive of Boeing Commercial Airplanes. Foster wasn’t present at the signing ceremony.

Air Astana currently operates a network of 60 international and domestic routes from its Almaty and Nur-Sultan hubs. Its fleet comprises 38 Boeing 767-300ERs, Boeing 757-200s, the Airbus family of A320/A321 (CEO/NEO/LR) and Embraer E190/E2 aircraft. Air Astana is a joint venture between Samruk-Kazyna, the National Welfare Fund of Kazakhstan, and BAE Systems, with shareholdings of 51 and 49 per cent respectively.