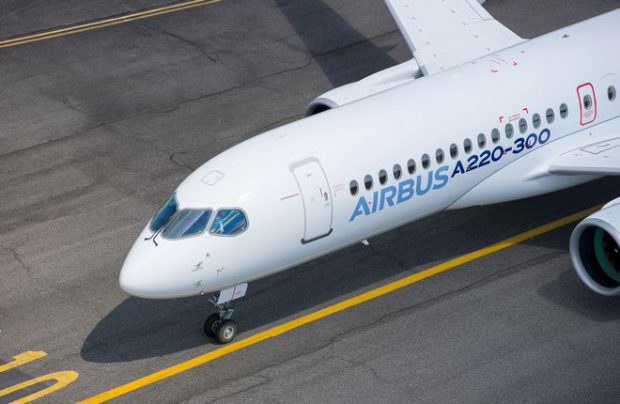 The backlog for the A220 family exceeds 500 units (Airbus)

The Airbus A220 (formerly named the Bombardier CSeries) is undergoing certification procedures in Russia in an effort propelled by its manufacturer, its engine maker Pratt & Whitney and Russia’s aviation authority Rosavitsiya.

Airbus is confident that the A220 family of aircraft will prove to be popular amongst Russian operators and forecasts that demand in the region for the narrow-body aircraft could be significant.

“We expect to have the A220 certified in Russia by the middle of this year. The work is in progress. We are in a close cooperation with the Russian aviation authorities who are providing us with complete support in all certification matters,” Airbus representative commented to ATO.ru, Russian Aviation Insider’s sister publication.

The first to be certified is the Airbus A220-300 (CS300) model. Rosaviatsiya confirmed to ATO.ru that it had received the application and that the Aviation Register of the Russian Federation – and unnamed accredited certification centres – “continue with their respective roles in accordance with the specified timeframe.”

At the same time, certification of the PW1500G geared turbofan, which powers the A220, is being accomplished by an application from Pratt & Whitney, Rosaviatsiya adds.

The A220’s arrival in the Russian market has been facilitated by a technical arrangement for mutual recognition of validity of aircraft certification approvals, in an agreement reached by Rosaviatsiya and Transport Canada Civil Aviation (TCCA) in January. “This technical arrangement makes it possible for Russian and Canadian aviation authorities to validate approval documents on aircraft, regulates post-certification activities and airworthiness directives,” Rosaviatsiya explains.

According to the latest Airbus’ annual forecast, demand for narrow-body aircraft with 100 seats and more in Russia and the CIS could reach 1,000 within the next two decades. “Logically some part of this demand will be covered by the A220. We are confident that this aircraft family may be of [particular] interest to Russian customers,” Airbus says.

Thus far, Latvia’s airBaltic remains the only operator of the type in the region. Its fleet of A220-300s could reach 80 by the middle of the next decade, although it currently operates 19 units. In Russia, Red Wings had plans to become the launch customer for the type, but later resigned due to the project’s changed economics.

The only operator of the E190-E2 in the CIS is Kazakhstan’s national carrier Air Astana, which has recently added a third aircraft of the type to its fleet. Neither the E195-E2 nor the B737MAX-7 is yet present in the region.

In late May, Airbus reported its backlog for the A220 has now exceeded 530 units.