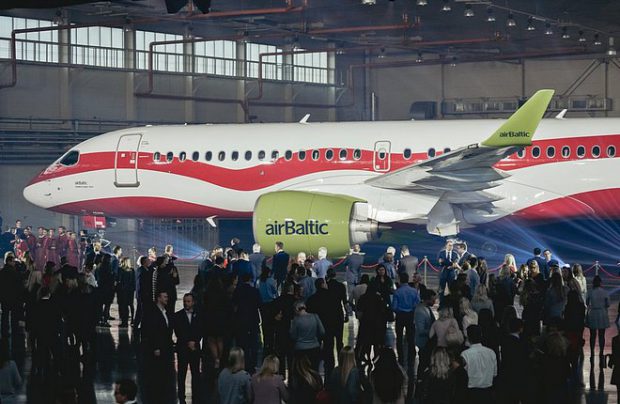 airBaltic’s Airbus A220-300 aircraft – sporting registration number YL-CSL – is now bearing the flag of Latvia and the name of Riga, its capital city (airBaltic)

airBaltic, Latvia’s biggest airline, presented a gift to the nation on the celebration of its centenary by sporting a special livery on an Airbus A220-300 aircraft at Riga International Airport on November 9, 2018.

airBaltic’s Airbus A220-300 (registration YL-CSL), one of 13 of the type that the hybrid carrier operates, is now bearing the flag of Latvia and the name of Riga, its capital city.

Martin Gauss, chief executive of the airline, states: “The airBaltic team is delighted and honoured to present a special gift to Latvia on its centenary, which is a historical event for every Latvian. We at airBaltic perceive ourselves as ambassadors of Latvia and we take every opportunity to spread the word about Latvia as a beautiful, successful and flourishing country.”

Raimonds Vējonis, president of the Republic of Latvia, echoes: “The red-and-white flag is our sanctity and our symbol. This [gesture] is proof of the determination of our people to fight and safeguard our freedom. Thanks to airBaltic for this gift, which will allow us to look up to the sky with pride.”

It is the first time in the history of airBaltic that an aircraft has carried artwork containing the Latvian flag national symbol. To create it, 15 professional painters worked 1,000 hours and employed a total of 250 litres of undercoat, top cover paint and lacquer – constituting a layer of 120 microns or 0.12 mm – were used to decorate the aircraft. The work was done at the base of Estonia’s Magnetic MRO with a support of AkzoNobel.