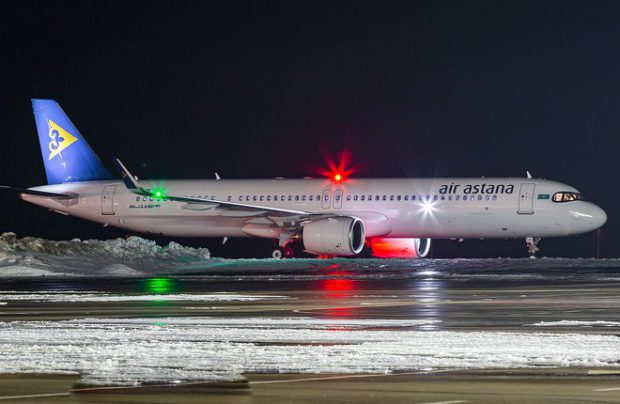 Pressing on with its fleet renewal programme, Air Astana, Kazakhstan’s largest airline, has taken delivery of its first of a total of four Airbus A320neo family aircraft, all of which are planned for delivery this year.

The Airbus A321LR (A321-200neo LR) new arrival, which has been taken on lease from Air Lease Corporation, has received the registration number P4-KGB and flew into the airline’s Nur-Sultan base airport on the last day of February directly from the Hamburg, Germany factory.

The aircraft is the long-range version of the Airbus A321neo and is capable of operating flights over distances up to 7,400 km. It comes equipped with 166 seats in a two-class configuration, offering 16 full lie-flat business class seats and 150 in economy.

The Pratt & Whitney PW1133G-powered aircraft is the second of the type in Air Astana fleet and is intended to replace ageing Boeing 757-200s with one of the carrier’s five 757s already withdrawn last year. The new aircraft will be utilised on flights from the central Asian country’s capital to Moscow, Paris, London and Istanbul, the airline reveals.

With this latest addition factored in, the Air Astana fleet of neo narrow-bodies has reached nine jets. By the end of the first half of this year the airline plans to receive three more new A320neos, it says in a statement.