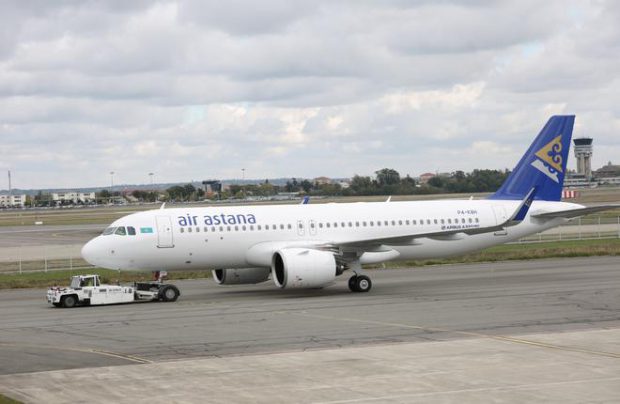 Since the beginning of 2017, Air Astana’s newest Airbus A320neo has spent a total of two weeks inside maintenance hangars due to the change of both engines, company’s president and CEO Peter Foster revealed to the Russian Aviation Insider.

The first re-motorized narrow-body A320neo was delivery to the Kazakh flag carrier directly from the assembly site in Toulouse in early October, 2016 whilst the maiden commercial flight followed shortly after in November.

Canadian Pratt&Whitney, the manufacturer of geared turbofan Pure Power PW 1100Gs, replaced both engines on the Kazakh A320neo after a whole number of faults was detected. Particularly, SAF engineers in Paris airport discovered an excessive among of oil chip in one of the engine’s bearings. Besides, the powerplant has had a registered bearing cooling system failure recently. Other deviations and minor malfunctions also used to take place, Peter Foster explained.

“The engine change was an exceptional event and I would like to reiterate that at no point were the lives of our passenger put at risk. We treat such issues with all due gravity, and I assure you the accuracy and reliability of maintenance services is our highest priority. We pay maximum attention to that,” the top manager emphasized.

There is nothing extraordinary about what happened with the company’s new A320neo, says Sergey Makarenko, senior manager for safety compliance for maintenance and continuing airworthiness. During his long aviation career, the aviator has come across multiple deficiencies that newly built aircraft used to face.

“None of the freshly designed machines gets perfect right away. Upon delivery, some time is inevitably spent for fine-tuning. The aircraft itself is a usual Airbus A-320 though powered by a new type engines. All NEO’s problems, thus, are engine-related. The manufacturer is working hard to rectify the situation and constantly issues service and operational bulletins as well as keeps an eye on the situation,” Makarenko adds.

Kazakhstan was not the only one to face problems with the Pure Power PW 1100G engine. Literally, on the next day after Air Astana reported a fault on the A320neo, Airbus spread out an operational bulletin with recommendations to pilots in case of cooling system failure.

“This problem is well-known for the industry, Pratt&Whitney is working hard to solve it. We are staying in close cooperation with the manufacturer and it keeps us advised on the performed flight tests. We are sure all issues will be resolved shortly. The new aircraft that Air Astana is expecting to receive in future should not have these problems,” Peter Foster commented.

Pratt&Whitney covered all the expenses related to engine replacement. On top of that, Air Astana wants to receive compensation for the AOG time. In this situation, the money does not matter that much, though, Peter Foster underlines. Solving the problem is what really matters. The company will be ready to take the delivery of the remaining batch only if the manufacturer removes current faults.

According to the contract, singed in Paris in 2015, Air Astana is to get eleven aircraft from Airbus. Six of them are scheduled for delivery until 2019 including another A320neo, one A321neo and four A321 LRs. The remaining four bodies (namely, three A321neos and one A320neo) are expected to come after 2020.

Despite the difficulties, Kazakhstan flag carrier still believes it made the right choice and is not going to discard PW-powered Airbuses. Peter Foster reminded the Russian Aviation Insider that this type is 15% more fuel efficient compared to its ancestors. And that is one heck of a reason.