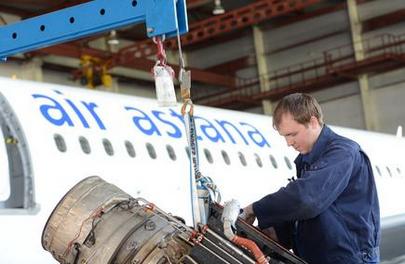 The carrier’s spokeperson says Air Astana is the only Kazakh operator cleared to perform base maintenance operations on the types. The EASA approval covers a limited range of operations, including C-checks, repairs and modifications involving complex equipment. It also clears the operator to perform maintenance operations requiring the presence of technicians with different specialisms such as avionics, aircraft structures, NDT, etc. Air Astana is now also permitted to carry out planned operations which require grounding the aircraft for over 72 hours, or works that are completed within four back-to-back shifts.

Air Astana technicians may now repair two engines simultaneously, replace components, and implement adjustments and modifications, including those covered by service bulletins. Troubleshooting and rectifications of component defects that require special support are also covered by the EASA approval.

These expanded MRO capabilities will enable the operator to save on maintenance by using in-house expertise for operations previously outsourced to foreign providers. They will also help speed up maintenance work, ensuring shorter AOG times for the Air Astana fleet.

With the current approval, Air Astana is well positioned to become Kazakhstan’s largest MRO provider. Earlier, the airline set up a training center for aircraft technicians, the first such EASA Part 147 facility in Central Asia. Its plans include an EASA Part 66 aviation school that would provide initial training for technical personnel.

The airline operates all of the aircraft types covered by the EASA approval, as well as Boeing 767-300ERs. Air Astana cannot provide maintenance services on the widebodies for lack of a hangar spacious enough to hold the type.