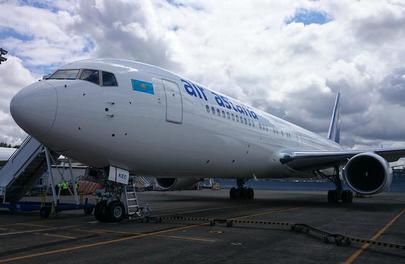 Kazakhstan’s national carrier, Air Astana, is planning to hold an initial public offering (IPO) in 2018. According to South China Morning Post, the shares will be simultaneously floated in Kazakhstan and in one of the three possible foreign markets. The reviewed options are London, Hong Kong and Singapore stock exchanges.

The airline’s chief executive, Peter Foster, said the IPO will “likely be between March and October 2018,” adding that “by law, there has to be a listing in Kazakhstan, but since the domestic market is illiquid, there will be a concurrent secondary listing in either London, Hong Kong or Singapore.

Foster also mentioned that the London Stock Exchange currently looks like the preferred option, however, the final decision will be made after consulting Air Astana’s shareholders.

At present, 51% of Air Astana’s shares are owned by the state national welfare fund Samruk-Kazyna, and the remaining 49% belong to the British company BAE Systems. The carrier’s earlier plans for an IPO failed because Kazakhstan’s government insisted on keeping its share intact, so the IPO could only apply to the BAE Systems’ share. This time, the government does not object to privatization. Moreover, the country’s Ministry for National Economics published a list of companies with government’s stakes in them, which are subject to sale to interested investors, and Air Astana is on the list, along with another carrier Qazaq Air and a number of airports, including Astana, Kyzylorda, Pavlodar and Shymkent).

Along with that, 51% of the company should remain in the hands of Kazakh stakeholders, according to the regulations for national designated airlines.

Foster preferred not to disclose any details regarding the IPO, apart from mentioning that shares of both stakeholders will change. In February, he expressed his views on the privatization process in an interview to Informburo.kz, saying that the time for listing “couldn’t be worse,” since global financial markets were in poor shape. He admitted that although there would certainly be sufficient interest for the carrier’s shares, their value would have to be depreciated.

In an official statement, however, Air Astana supported the government’s decision saying the IPO is in line with the carrier’s long-term interests.

Earlier, the Samruk-Kazyna fund mentioned their intent to sell about 25% of their share in Air Astana, but only to a Kazakh company.

At the end of 2015, Air Astana managed to increase its new profit by 144% to $47.4 million. Its revenues decreased 21% to 738.1 million. The carrier expects to close the first half-year 2016 with a loss of up to $10 million, due to a steep devaluation of the national currency. However, the airline hopes to go back over the red line by the end of the year.