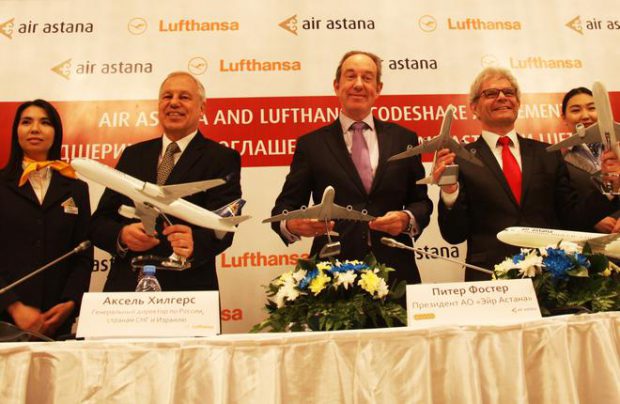 Kazakhstan’s largest airline Air Astana made a significant step to enhance its potential in European direction having signed a code-sharing agreement with German air carrier Lufthansa. The ceremony was held on March 15 in Astana and the document shall become effective from March 26, 2017. The new codeshare will cover Air Astana’s flights from Astana to Frankfurt and Lufthansa’s flights from Frankfurt to Almaty and Astana. As a result, both carriers will extend their route networks and be able to offer their passengers through fares and single ticket check-in for both passenger boarding and baggage throughout the companies’ connection flights.

The agreement also implies the parties will launch a single-code flight between Atyrau and Frankfurt within the next 12 months.

Apart from that, business-class passengers and members of Air Astana’s Nomad Club frequent-flyer program will now have access to Lufthansa’s business lounges.

Another provision stipulates Air Astana will move to Terminal 1 at Frankfurt Airport. “It is rather important for us to be able to move to Terminal 1 as we now can offer our passenger maximum convenience and seamless connectivity with flights to European destinations,” says president and CEO of Air Astana Peter Foster.

Axel Hilgers, Senior Director Sales Russia, CIS and Israel at Lufthansa, emphasizes the German party will in the first place benefit from special tariffs and convenient connections for domestic flights, for example to Aktau and Atyrau (where many German expats are employed in the oil and gas sector), and cities in Northern Kazakhstan where ethnic Germans reside. The director also sees potential in connection flights to Bishkek, Tashkent and Urumchi.

“Kazakhstan is one of the fastest-growing economies in the world and it is vital for us to be here. Now that Air Astana demonstrates readiness and is confidently present in major cities of Kazakhstan – Almaty and Astana — it is the right time to move on to the next stage of our cooperation, namely the code-sharing agreement. So far, joining the Star Alliance is not under discussion but we will certainly consider this option in future”, he adds.

Remarkably, the companies signed an interline agreement way back in 2003, when the Kazakh flag carrier had been just established. And ever since Air Astana has been enthusiastic about developing cooperation with Lufthansa further on. However, it took eleven more years for the two to sign a code-sharing agreement.

The parties announced Miles&More program members will be able to gain miles while travelling on Air Astana flights. Although for now, it will not work the other way around – Nomad Club frequent-flyer miles will not integrate with the German counterpart.

Air Astana is a joint Kazakh-British venture. 51% of it is controlled by the national welfare fund Samruk-Kazyna and 49% belongs to British defense corporation BAE Systems. The company is based in two hubs in Astana and Almaty and flies to more than 60 international and domestic destinations.