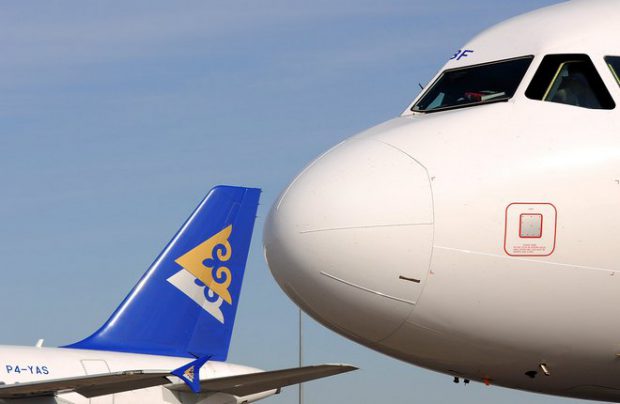 The plan for next year is for Air Astana to bring its fleet to 42 aircraft, up from the current 36 (Air Astana)

Kazakhstan’s Air Astana Group has reported its preliminary annual operational result for 2019 which anticipates that both of its subsidiary airlines – the full-service Air Astana and its low-cost sister carrier FlyArystan – will have combined to serve more then five million passengers thereby achieving a 17 per cent improvement on last year.

“This year was a break-through for us, because we launched [our] new budget carrier FlyArystan on May 1. The airline has thus far demonstrated excellent performance and growth perspectives,” comments Peter Foster, Air Astana’s chief executive. “So now travellers in Kazakhstan can still opt for full-service with Air Astana or choose the desired package of services offered by FlyArystan. By the end of the year Air Astana’s fares were lowered by 13 per cent, and is now affordable for anyone in Kazakhstan, and we welcome these changes.”

In terms of fleet development this year, Air Astana has added four Airbus A320/A321neos, including an A321LR, which is the long-range version of the Airbus A321neo, and four Embraer 190-E2 regional jets. As a result, the average age of the Kazakh flag carrier’s fleet now stands at 6.5 years. The plan for next year is to bring the fleet to 42 units, up from the current 36.

In the period, the airline increased its flight frequencies on routes to Delhi, Dubai, Istanbul, Dushanbe, Bishkek, Seoul, Moscow, Tashkent and Tbilisi, and launched new services from Almaty and Nur-Sultan (formerly Astana) to Sharm-el-Sheikh and from Almaty to Bodrum.

On the maintenance, repair and overhaul (MRO) side, the year also marked an important milestone, with the airline’s maintenance division at Almaty, assisted by Russia’s S7 Technics, performing its first in-house C-check on an Airbus A320neo in November.

In the meantime, the airline is proceeding with its ab-initio pilot training scheme, which was established in 2008 to train the next generation of Kazakhstan’s pilots. Up to now the flight programme has seen 280 cadet graduates and this year 23 Kazakh cadets are on a flight path to their careers at specialist schools located in Ireland, Spain and Finland. The plan is to train 40 cadets per year over the next five years.

Air Astana is also currently considering the launch of an array of popular international routes and has already decided on a direct service between Almaty and Paris starting June 3, 2020. Overall, the route network will have a total of 63 destinations.

Low-cost carrier (LCC) FlyArystan has its own targets. This year it expects to have served some 700,000 passengers whilst expanding its network to 13 destinations, including its first international service from Nur-Sultan to Moscow starting on December 13.

The budget airline’s fleet is scheduled to reach 10 aircraft next year, to support a network expansion to 40 scheduled routes.

Flying regularly since 2002, Air Astana, which is a joint venture between the state-owned Samruk-Kazyna Fund (51 per cent) and BAE Systems, currently serves a network of 60 domestic and international routes, operating a mixed fleet of 36 aircraft consisting of Boeing 767/757s, Airbus A320/А320neos, A321/A321neos and Embraer E190/E190-E2s.