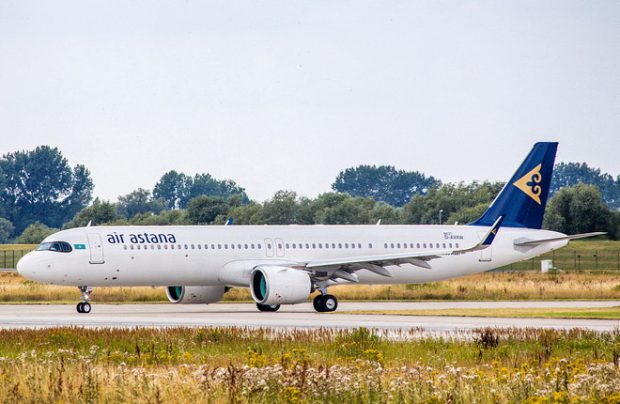 Kazakhstan’s Air Astana has become the first operator of the long-range version of the Airbus A321neo in the Commonwealth of Independent States (CIS). With this new type, the central Asian country’s flag carrier will be able to tap into new, previously inaccessible long-haul markets with smaller capacity airliners, while replacing ageing Boeing 757s.

This week, the airline took delivery of its first of seven of the A321-200neo LRs, to be delivered on long-term lease agreements from the USA-based Air Lease Corporation. Six more are due to join Air Astana’s fleet in the next 12-18 months, “depending on the manufacturer’s output” the airline says.

The aircraft, each of which can operate long-range flights of up to 7,400 km, are powered by PW1133G-geared turbofan engines and come equipped with 166 seats in a two-class configuration offering 16 business full lie-flat business class seats and 150 in economy, an arrangement which, it says, provides “premium wide-body comfort in a single-aisle aircraft cabin”.

Consequently, Air Astana will continue its strategy of growth and network expansion to European destinations as well as on routes to Asia. “The A321-200neo LR is instrumental to Air Astana’s fleet modernisation programme to support the airline’s extended range operations and expanding route network,” insists Alex Khatibi, the executive vice-president of Air Lease Corporation.

The A321LR will join Air Astana’s fleet of 18 Airbuses, consisting of eight A320s, four A321s, three A320neos and three A321neos. Some of the A320ceos are being transferred to its budget subsidiary FlyArystan.

The airline also operates the Boeing 767 and Boeing 757, as well as the regional Embraer 190 and Embraer E190-E2 aircraft types. By the end of this year the size of Air Astana’s fleet will increase to a total of 39 aircraft.

In the CIS countries, the A320neo family of aircraft are also operated by Russia’s S7 Airlines, Ural Airlines and Uzbekistan Airways.