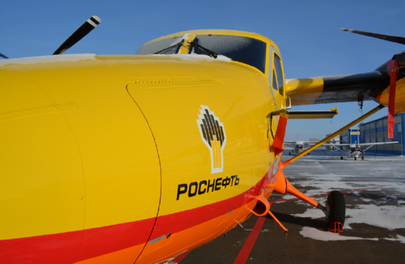 Last week, AeroGeo announced that the fifth out of 10 Twin Otters ordered in Canada by RN-Aircraft, the corporate operator of the Russian oil giant Rosneft, arrived at its base in Krasnoyarsk-Severny airport. RN-Aircraft has no Air Operator Certificate, and still has not officially announced which carrier will fly and maintain their aircraft.

The first three aircraft arrived at Krasnoyarsk in December of last year. The fourth aircraft (allegedly s.n 933, tail number RA-67291) arrived in March. The fifth aircraft is s.n. 935 and has tail number RA-67292. The sixth aircraft has competed acceptance procedures done by AeroGeo in Canada and is waiting for its ferry flight via Anchorage and Anadyr to Siberia, Mamayev said.

AeroGeo has already received approval for maintaining the Canadian-made turboprops, and has been providing such services to RN-Aircraft. If the carrier is finally selected as Rosneft’s operator, it will be the third operator of Viking Air’s Twin Otters after ChukotAvia (which has four such aircraft in its fleet) and Aurora (which flies two DHC-6s).