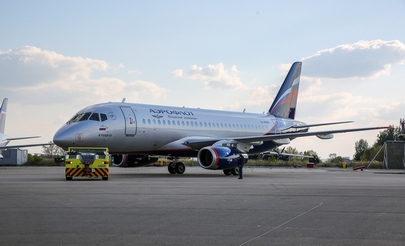 Aeroflot board of directors approved leasing two new Sukhoi Superjet 100s (SSJ 100) from Sberbank Leasing. One of the aircraft has already been ferried to Sheremetyevo airport, the other should be delivered to Aeroflot before the end of November.

Thus, out of Aeroflot’s firm order for 30 SSJ 100s, 22 have been delivered (including the present delivery): the first ten through VEB Leasing, and the later dozen through Sberbank.

According to the contract, the duration of leasing agreement is 144 months (12 years) for each aircraft starting from delivery date. The carrier’s spokesperson could not clarify, whether the aircraft will stay with the airline or return to the lessor once the contract is terminated.

In January this year Aeroflot signed a Letter of Intent with the Sukhoi Civil Aircraft (SCAC) for 20 more SSJ 100s. Should this LOI become firm contract, the airline’s fleet of Russian regional aircraft will reach 50. Total flight time of Aeroflot’s SSJ 100 fleet has exceeded 62,000 hours, the airline said in a statement.