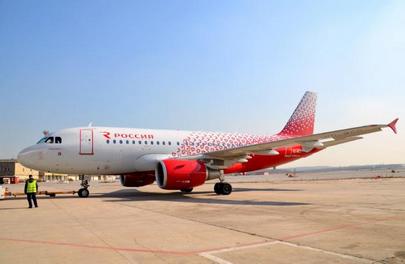 St. Petersburg-based Rossiya Airlines, a subsidiary of Aeroflot Group, has reported taking delivery of its first Airbus A319 in Rossiya’s new livery. In a few days, British painting provider Air Livery will hand over the second aircraft of the type to Rossiya. In late April, specialists of a leading Russian MRO provider, S7 Engineering (a subsidiary of Engineering Holding), will start repainting the third Airbus A319. Rossiya has been absorbing a part of assets and taking over personnel from its sister carriers Donavia and OrenAir.

Rossiya Airlines has already received its first Airbus A319 in the new livery, an aircraft that has been named “Volgograd” after the southern Russian city. In addition to this aircraft, in late February, Aeroflot’s board of directors made a decision to sublease another two Airbus A319s to Rossiya. All three aircraft were built by Airbus in 2009, the same year they entered service in Aeroflot, and belong to the Chinese leasing company BOC Aviation. Aeroflot reports that, for each aircraft, the sublease duration cannot exceed 30 months (2.5 years) from the sublease commencement date.

Air Livery’s sales manager for Russia and the CIS Konstantin Sablukov said that the painting of second aircraft for Rossiya Airlines, which will be named “Rostov-on-Don”, will be finished by the end of this week in Air Livery’s facility in London’s Southend Airport, which is located in the county of Essex.

The Airbus A319 with tail number VQ-BCO was painted by Air Livery’s specialists in seven days in the service provider’s shop in East Midlands Airport, located in Leicestershire. Answering the question about a specific process of applying the Rossiya’s new livery, Konstantin Sablukov explained: “It includes a lot of paint masks, on which the paint is applied. They are cut on a plotter and then pasted on the aircraft. After they have been removed, they leave a specific pattern.”

In late April, specialists at the S7 Engineering paint hangar at Mineralnye Vody Airport will start painting the third aircraft of this lot, an Airbus A319 with tail number VQ-BBA. This information was confirmed to Russian Aviation Insider by a representative of Engineering Holding.

“Further re-painting of aircraft in new Rossiya Airlines’ branded livery will be undertaken as new aircraft enter the carrier’s fleet, taking into consideration the effective commercial schedule and aircraft scheduled maintenance dates,” noted Rossiya’s press release. According to Konstantin Sablukov, the number of aircraft to be repainted in Rossiya’s new livery is expected to increase in May through this summer.

After three Airbus A319s have been handed over to Rossiya Airlines, Aeroflot will no longer have any aircraft of this type. In total, the leading Russian airline operated 15 aircraft of this type from 2003 to 2015. Eventually, nine of them ended up in the fleet of the carrier Aurora, where Aeroflot holds a 51% majority share; two in Donavia’s fleet, the entire fleet of which is being handed over to Rossiya; and one, according to data from public sources, is being handed over to the Ukrainian airline Dart.

Rossiya Airlines unveiled its first aircraft in the carrier’s new livery last week at Vnukovo Airport, a Boeing 747 that was previously operated by Transaero. This wide-body aircraft was painted in Dublin by specialists from the Irish company Eirtech