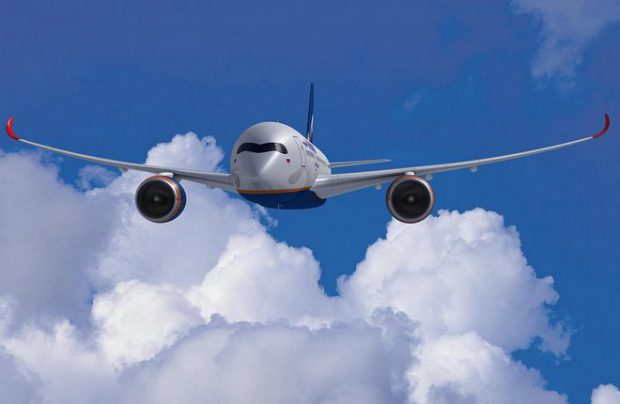 Russia’s national carrier will take delivery of the first Airbus A350 in 2020, two years behind the initial schedule (Airbus)

Aeroflot is poised to further delay the introduction of its new Airbus A350 aircraft until 2020, Russian Aviation Insider reveals. An investors’ presentation on the group’s nine months 2018 financial results, which included its fleet strategy until 2021, calls for the delivery of the first batch of eight wide-body aircraft to commence in two years’ time.

Originally, the European planemaker’s newest wide-body aircraft were scheduled to be introduced this year, but were then postponed to 2019. In 2021, another seven A350s are expected to be delivered.

Although Russia’s major airline is planning to add a total of 28 A350-900s to its fleet up to 2025, it has signed firm orders for only half the number so far. These aircraft are intended to replace the carrier’s A330s, as it plans to phase out 10 of these earlier-generation wide-bodies by the end of 2021.

By 2021, the number of Boeing aircraft in the entire group’s fleet (which includes Aeroflot, subsidiaries Rossiya Airlines, Pobeda and Aurora) will exceed the number of Airbus models it operates. At the beginning of this year, the group operated 176 Airbus aircraft and 98 Boeing jets.

By the end of 2021, the fleet will boast 149 Boeing planes and 136 Airbus aircraft, partly due to low cost carrier Pobeda Airlines’ aggressive plans to enlarge its Boeing 737 fleet, estimates Russian Aviation Insider.

The group is also undertaking an ambitious plan to increase the number of Russian-made aircraft in its fleet, which will rise from 37 (1 January 2018) to 95 by the end of 2021, primarily through the acquisition of Superjet 100 regional jets. This number also includes the delivery of six locally-produced advanced narrow-body MC-21s in 2020 and seven in 2021 – provided the programme schedule does not suffer from further delays.

The overall, politically motivated, goal is to raise the number of Russian-made aircraft in Aeroflot’s fleet to 190 by 2023. Some of the new SSJ100s are also expected to be introduced into Rossiya’s fleet.

Meanwhile, regarding next year, the group is taking a cautious approach to capacity, with no additional expansion planned in 2019, even though it will be modernising its fleet with the delivery of 24 new aircraft. At the same time, 24 ‘old’ aircraft will be retired.

In the period up to 2021, it is mostly the regional segment of the fleet that will see considerable growth.