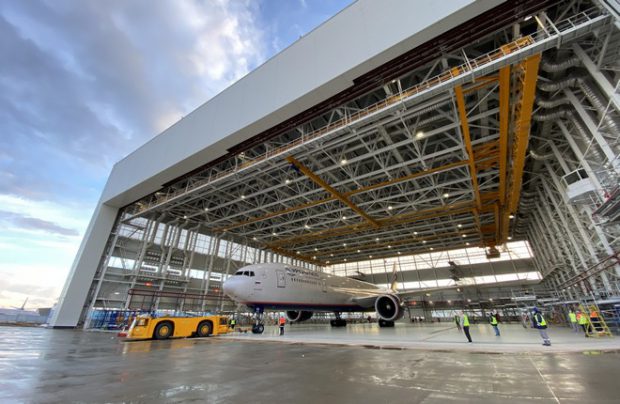 Aeroflot is all set for its first Boeing 777-300ER heavy check to be performed in Russia, having opened a new hangar at its home Moscow Sheremetyevo airport. The new facility is operated by Aeroflot Group’s MRO subsidiary A-Technics. Prior to moving wide-body maintenance in-house, Russia’s flag carrier sent its Boeing 777-300ERs to China for shop visits with Sino-American service provider Boeing Shanghai Aviation Services. Aeroflot currently operates twenty of the long-haul wide-bodies, and expects delivery of 21st one in May.

According to Mikhail Korobovich, A-Technics’ general director, the new hangar is dedicated primarily to cover the maintenance needs of Aeroflot Group. This year the facility is expected to complete six Boeing 777 C-сhecks for its parent airline. “Closer to the end of this year we’ll also have two Boeing 747s here operated by [another group’s carier] Rossiya,” – Korobovich revealed, adding that to service Rossiya’s Irish-registered aircraft A-Technics will have to secure EASA approval. Russian authority Rosaviatsiya issued its certificate on March 15.

Contracts with third-party customers may only be possible starting 2022, and provided the hangar schedule allows.

Along with one wide-body, the new hangar with 7,250 square meters of floor area will be capable of simultaneously servicing two regional Superjet 100s (SSJ100). The complex also has cabin interior and component repairs capabilities. Since last April Aeroflot group is renting another hangar at Sheremetyevo, which is used for light maintenance, including A-сhecks on widebody Boeing 747 and 777, and Airbus A350. It is also used for line and base maintenance on its Boeing 737-800s, Airbus A320s and Superjet 100 regional jets. A-Technics also operates a hangar in Orenburg (a city in the Southern Urals, about 1,450 km south-east of Moscow) for Boeing 737NG C-сhecks.

A-Technics’ aim is to become the sole MRO provider for Aeroflot Group’s entire fleet, Korobovich explains. The company currently caters for between 60 and 70 per cent of Aeroflot’s maintenance volumes, the rest is done by Aeroflot’s own technical department. A-Technics now also supports St. Petersburg-based Rossiya’s operations in Moscow, and has recently won in a tender for providing Boeing 737 maintenance for the group’s low-cost operator Pobeda Airlines.