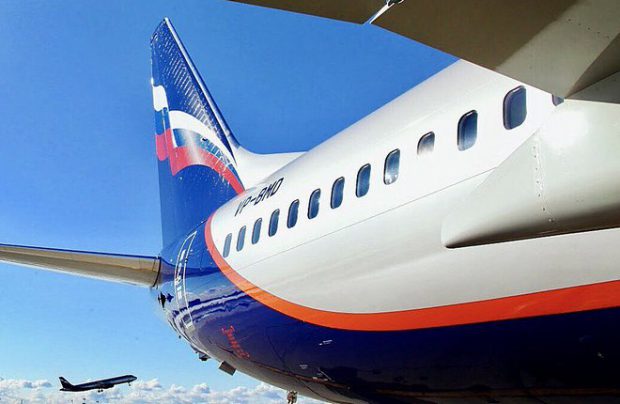 This year, Aeroflot Group is targeting 56 million passengers, a 12 per cent increase on the 50.1 million of 2017 (Aeroflot)

The target is between 90 and 100 million passengers, of which 10-15 million would be transit travellers, and the improvement would be largely attributable to the performance of LCC Pobeda, which is expected to quadruple its current operational results over the period. At the same time, the plan for the group’s combined fleet is to reach 520 aircraft from the existing 360. Of this number, 190 will be Russian-produced airliners.

The ambitious targets are part of the Aeroflot Group’s five-year business strategy that was presented on October 29 to Russian president Vladimir Putin by the conglomerate’s recently re-elected general director Vitaly Saveliev, according to the Kremlin’s official website.

The state-run group’s five-year term ambition is to double its traffic from last year’s 50.1 million passengers. The plan for this year is 56 million passengers, a healthy 12 per cent improvement on 2017. The aspirations are based on a market forecast compiled by a group of industry experts contracted by Aeroflot. The experts are predicting that the annual growth will average 6.4 per cent, which provides for the planned development, Saveliev explained.

The forecast suggests that flagship carrier Aeroflot will reach 52 million passengers. “We shouldn’t overload Aeroflot, because we are staying in the premium segment,” the head of the group said, insisting that the main hope is centred on LCC Pobeda Airlines, as its market segment is currently experiencing the most dynamic growth. This year Pobeda is expected to carry seven million passengers, but by 2023 its traffic will roughly quadruple and grow to between 25 and 30 million. To support these growth plans the airline is to continue to aggressively expand its fleet. From next year it will start taking delivery of Boeing’s next-generation 737MAXs, and is counting on adding an additional 20 of the narrow-body types by 2021. Pobeda currently operates a mono fleet of 22 Boeing 737-800s and is adding two more aircraft of the type before the end of this year.

Rossiya Airlines, in turn, is to remain more ‘socially-oriented’, as its competitive advantage is limited by its ageing fleet, which it inherited from the deceased Transaero Airlines. The St Petersburg-based carrier will largely operate low-margin flights or provide those socially important air connections that are impossible without state support. Back in 2015, Saveliev had even hinted that Aeroflot and Pobeda, the group’s two most viable businesses could, in the long run, be the only survivors.

Aurora Airlines, which operates in Russia’s Far East and is co-owned by the regional authorities, is expected to double its traffic by 2023, partly due to the development of Vladivostok as a hub. The airline has also embarked on serving the Khabarovsk region, competing for the local market with Khabarovsk Airlines. Last year there were rumours that Aeroflot’s subsidiary had intentions to gain full control of the local operator.

Overall, the five-year strategy is expected to bring the group’s total revenue to 1.3 trillion roubles in 2023.