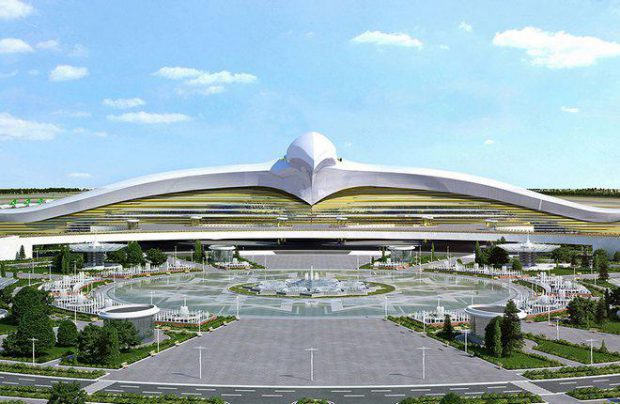 A new international airport has been officially opened in Ashgabad, the capital city of Turkmenistan, national news agency Türkmen döwlet reports. The new building, which replaces the old one, occupies the territory of 1200 hectares. The airport’s total capacity is now estimated at about 2,000 passengers per hour.

The new airport, realized by Turkish developer Polimeks, includes three terminals, with a cargo terminal rated at a capacity of 200,000 tons of cargo per year. The new international passenger terminal will be able to handle 1600 passengers per hour or 14 million people annually. It is a five-storey building with an overall floor space of 192,000 square meters and equipped with jet-bridges. Its check-in and departure lounges use advanced automated systems providing faster passenger flow through the airport.

The overall territory of the cargo terminal comprises 17,100 square meters and includes export and import zones, two refrigerator halls and storage facilities capable of processing various types of cargo. Apart from that, a mail-sorting facility of the national mail service company Turkmenpochta is in the plans for the new airport. The apron of the cargo terminal has five stands capable of accommodating aircraft of any type and equipped with centralized refueling stations.

The 33,500-meter aircraft maintenance hangar complex can simultaneously handle either five narrow-bodies or three wide-body aircraft, TurkmenPortal reports. As soon as it starts operation, it will be able to provide heavy checks. In particular, the facility has everything needed for C-checks of various types of Boeing aircraft. The maintenance center will primarily cater to the interests of the national air carrier Turkmenistan Airlines but will also be able to offer MRO services for third-party airlines.

With a 3,800-meter long and 75-meter wide runway, which was constructed last year, the new airport is open for all types of aircraft. The older runway has also been resurfaced and stretches 3,800 meters in length. Now that the new terminal has been brought into operation, the older one will most likely be used for servicing charter flights.

The airport also includes the Civil Aviation Training Center with an aviation personnel training school and a flight simulator facility.

Notably, consultancy services for the project were provided by Munich Airport, particularly on the overall management and fine-tuning passenger and cargo handling systems. The airport is already operational. A new Boeing 737-800 of Turkmenistan Airlines, supposedly EZ-A018, had the honor of performing the first landing at the new national gateway.

The project is considered to be the largest within the national 2012-2030 Civil Aviation Development program. Its cost was announced to exceed $2 billion.