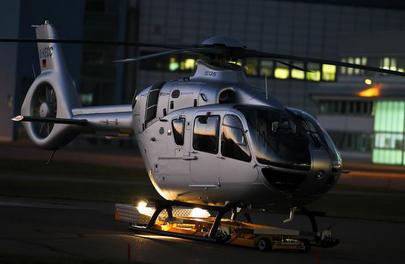 Over the next ten years, about 160 light twin-engine H135s, a model from Airbus Helicopters formerly known as EC135 T3/P3, will be assembled at the Ural Works of Civil Aviation (UWCA). Manager of the H135 program Axel Humpert told Russian Aviation Insider that the 160 figure is what the company estimates will satisfy the demand for the rotorcraft of this type on the Russian market.

Such large-scale production should allow for recovery of the cost of the project, which requires a large sum of investment. Humpert has not revealed the exact amount of the project.

For the sake of market stimulation, according to Airbus Helicopters, in 2017 the production facility will assemble four H135s, which will serve the role as the “initial batch,” intended to allow for the certification of production. Airbus Helicopters expects to begin operation of the four rotorcraft in the same year. In the future, the volume of production is expected to increase, while the training of UWCA employees will begin soon after the first contracts have been signed.

French manufacturer Turbomeca will also supply UWCA with kits for the assembly of their Arrius 2B2Plus turboshaft engines, an Airbus Helicopters spokesperson said. The production facility is already certified in the maintenance of this type of engine.

It is expected that the first contracts for the Russian assembly of the H135 will be signed this year. The Russian representative of the manufacturer, Airbus Helicopters Vostok, will take part in attracting customers. At the moment, talks with companies such as Gazprom Avia, PANH, and the Russian Ministry of Emergency Situations, are being carried out.

Russian operators of the rotorcraft will be given the option of selecting the standard version of the H135 as well as the option for the medical transport version. Airbus Helicopters expects to develop first and foremost the market of medical and search and rescue operations. Airbus Helicopters did not rule out that the supplier of medical equipment may be a Russian company, but no negotiations have been conducted as of yet.

In an interview with Russian Aviation Insider, the general director of Airbus Helicopters Vostok, Emeric Lhomme, said that maintenance of the H135, with the cooperation of UWCA, is planned to be carried out by the manufacturer itself. Moreover, a joint project provides an option where the partners in the production independently organize medical transportation in regions of Russia. That is to say that they will sell not helicopters to customers, but flight hours.

According to Russian Aviation Insider’s data, there were 16 H135s in use in Russia at the beginning of the year . A large part of them have been fitted with Turbomeca Arrius 2D2Plus.

According to the manufacturer, today there are about 20 helicopters in Russia available for medical purposes, which is not enough. Airbus Helicopters has estimated that the Russian market requires about 140 of such helicopters.