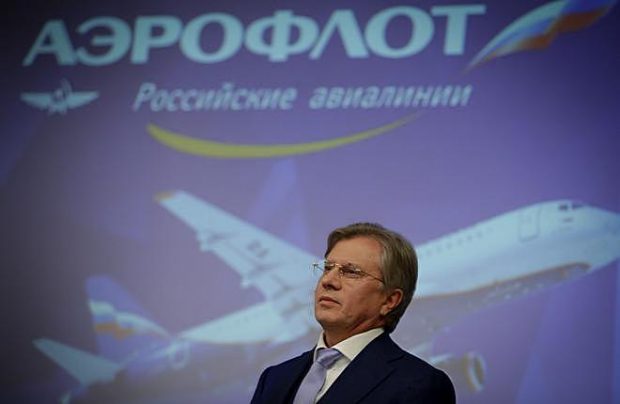 Vitaly Saveliev, general director of Aeroflot, is pictured during his presentation of the group’s development strategy to president Vladimir Putin in October 2018. He predicted that the group would serve 56 million passengers by the end of the year (Leonid Faerberg / Transport-Photo)

Aeroflot Group, Russia’s dominant airline holding, carried close to 56 million passengers in 2018, some 12 per cent more than in the previous year, according to general director Vitaly Saveliev’s statement in Aeroflot’s in-flight magazine. No separated traffic figures are revealed for each member of the group’s subsidiary airlines yet, which consist of Aeroflot, Rossiya, Pobeda and Aurora, but their combined total almost confirmed Saveliev’s commitment that he announced during his presentation of the group’s development strategy to president Vladimir Putin in October last year.

By November 2018, Aeroflot Group had exceeded the operational results of the entire prior year of 2017. Out of a total of 51.4 million people served in the first 11 months of 2018, the Russian flag carrier was accountable for 32.8 million passengers, an 8.5 per cent year-on-year improvement. But it was low-cost subsidiary Pobeda Airlines that demonstrated the highest growth rate. In the first nine months of the year it carried 5.2 million passengers, 55 per cent more than for the same period of 2017, thereby exceeding the results of the entire previous year by 13 per cent. The fast growth is attributed to a 40 per cent fleet expansion from 16 Boeing 737-800s at the beginning of 2018 to 23 by the end of the year. In the same period, Aeroflot added 25 aircraft to its fleet, which now stands at 249 units.

As for the future plans, in its five-year strategy for the period up to 2023, Aeroflot Group is planning to double its passenger numbers by focusing on south-east Asia-Europe transfer traffic, a project which includes the addition of a second international hub at Krasnoyarsk and three regional bases at Sochi, Yekaterinburg and Novosibirsk – driven by the development of its low-cost carrier.